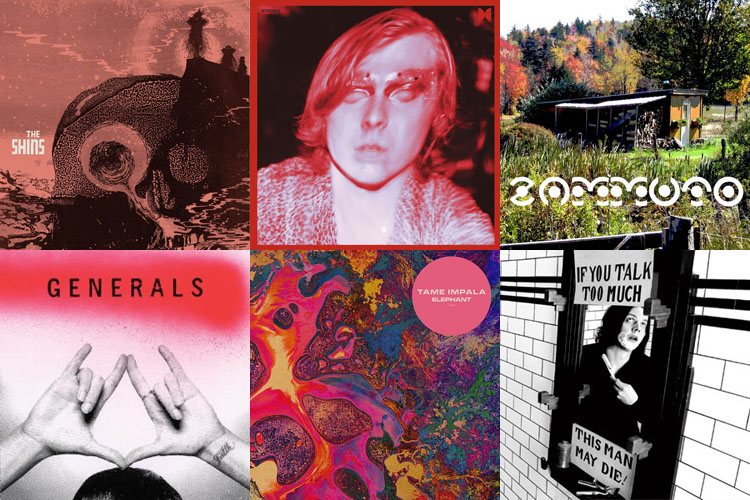 The year is almost over, so there's no point in wasting any more of your precious time. Here is the second half of my 40 favorite tracks of 2012:


"Parted Ways" - Heartless Bastards
Continuing their transition from garage rockers to desert ramblers, Erika Wennerstrom acknowledges the change in scenery as she pines for "a wide open space to breath in." No stranger to minimalistic productions, Jim Eno keeps the track sparse, building it around Wennerstrom's vocal delivery while injecting an appropriate amount of southern charm.
Buy: Arrow

"Weep Themselves To Sleep" - Jack White
Sweeping in scope when compared to the relative concise nature of the tracks surrounding it, "Weep Themselves To Sleep" serves as a glimpse at White's true, adulterated inclinations. The contents aren't altogether surprising; elliptical language, a jangling piano and a bluesy arrangement that wouldn't sound out of place in an opry. It's the show-stopping number, arranged with a calculated potency.
Buy: Blunderbuss

"Angles" - Lee Ranaldo
Comfortably inhabiting the role of frontman in his latest project, Ranaldo brings all of his skills to the table. His lyrics chronicle a life spent behind a guitar in an alternate tuning, as Nels Cline's virtuosic riffs and Steve Shelley's unobtrusive rhythms rain down around him. In a post-Sonic Youth world where a piecemeal fix is the only option, this contribution to the canon ranks as one of Ranaldo's best.
Buy: Between the Times and the Tide

"They Could Be Wrong" - Lianne La Havas
Nestled at the end of the English singer-songwriter's debut release, "They Could Be Wrong" serves as a fitting sendoff to a record that manages to do justice to La Havas' impeccable voice. Lending a soulful undertow to the track's understated chordal structure, the songstress grounds her lofty sentiments with a naturalistic poise.
Buy: Is Your Love Big Enough?

"Prairie School" - Lymbyc Systym
There's nothing inherently new to be found in the palette that Lymbyc Systym creates their latest record with, yet the duo still manages to discover new dynamics via the trifecta of Rhodes keyboards, drums and synths. "Prairie School" bursts with energetic melodies as Jared Bell deftly jumps between tones atop a manipulated beat. Harnessing some kind of fraternal link, the Bell brothers find synchrony with sublime confidence.
Buy: Symbolyst

"Winter" - Maps & Atlases
Bestowing a pop-informed sheen to their math rock tendencies, finger-tapped melodies are layered upon pulsating rhythms as Dave Davison sings an ode to cabin fever. Descending, at times, into a symphony of looped vocal samples and angular strains, the Chicago group makes even their most chaotic moments sound perfectly natural.
Buy: Beware and Be Grateful

"Generals" - The Mynabirds
With a militant cadence, Laura Burhenn lays out her manifesto, championing the power of love and rebelling against the engines of war. The Omaha-based singer isn't the most threatening iconoclast, but with the help of Richard Swift she's able to transform her outrage into one of the year's most memorable tracks.
Buy: Generals

"Harps" - The Sea and Cake
Seamlessly blending synthetic and acoustic tones, Sam Prekop leads his band of Chicago stalwarts into another subtly upbeat gem gleaned from their tenth album. After 18 years together, the group has never sounded more steadfast in their approach, delivering one of the best songs in a storied career that shows no signs of ending.
Buy: Runner

"Ann Arbor Part 3 & 4" - Shigeto
A continuation of the adventuresome sonics he showcased on 2010's Full Circle LP, "Ann Arbor Part 3 & 4" finds Zach Saginaw approaching his loop-based creations with a more gentle touch. A pattering beat provides the bed for an array of samples that flit forward and then reverse. There's something in this track that most electronic music eschews entirely: some heart.
Buy: Lineage

"The Rifle's Spiral" - The Shins
Springing to life with an intensity that seems almost uncharacteristic, the latest incarnation of James Mercer's band kicks off Port of Morrow with a track that plays likes a call to action. Bolstered by a host of chirping synths and criss-crossing guitar lines, Mercer pulls together a composition that echoes the honesty of his past work, concurrently marking an exciting new direction.
Buy: Port of Morrow

"A Hundred Needle Pins" - Sweet Lights
A gentle pop-rock ballad originating from the fertile music scene of Philadelphia, this highlight from Shai Halperin's latest project finds the musician embracing his influences while finding his own voice as a solo artist. There's an undeniably pleasant feel to this Beatles-indebted arrangement, aided by Halperin's sly lyrical sensibility.
Buy: Sweet Lights

"Mind Mischief" - Tame Impala
Wrapping a multitude of layered vocals and swirling embellishments around the simple riff that anchors this track, Kevin Parker confidentially inhabits the psychedelic sound that has become his trademark. The song feels like one ripped out of another era, gently retrofitted with a few modern parts and offered up as the perfect soundtrack to your next mind-altering experience.
Buy: Lonerism

"Would You Be My Love" - Ty Segall
Contemplating his own mortality with a hefty dose of sunny, Californian distortion, Segall turns in two minutes and fifteen seconds of effortlessly charming guitar rock. With drums pounding as the singer repeatedly imparts his simple request, there's an underlying urgency to the track as a whole—a guy with a head full of songs and only one lifetime to sing them all.
Buy: Twins

"Tell Me What's Inside Your Heart" - Ty Segall Band
If you've ever had the pleasure of seeing Ty Segall in concert, then the snarling intensity of this track will strike you as familiar. A little rawer than his usual work in the studio, this song captures the dynamics of Segall's core group of confidants and collaborators without descending into the realm of self-indulgence. Warts and all, it's some of the more joyous noise produced this year.
Buy: Slaughterhouse

"Serpents" - Sharon Van Etten
Apart from her unmistakable vocal presence, the self-assured woman that oversees this track is a far cry from the somewhat timid singer-songwriter who inhabited Van Etten's first full length release. She has grown both personally and musically, and it all comes to a head on this wailing number that finds new ways of getting under your skin.
Buy: Tramp

"The Witch" - The Walkmen
Hamilton Leithauser  found inspiration in the delivery of Frank Sinatra while recording vocals for Heaven, an influence that imbues this track with an inexplicably timeless quality. Resting on a bed of blaring organs and crisp percussion, it's not hard to imagine Old Blue Eyes kicking off his indie rock career with this striking tune.
Buy: Heaven

"Birds" - We Are Serenades
Bursting with strings and brutally sincere lyricism concerning love and life, the debut single from We Are Serenades is a pretty typical example of Swedish indie rock. Still, there's something masterful about the way that Adam Olenius and Markus Krunegard expand their plain-spoken ode into a grandiose statement that almost entirely disguises its simplistic origins.
Buy: Criminal Heaven

"Size Meets the Sound" - Woods
On an album filled with folk rock gems, one shines just a little bit brighter than the rest. Jeremy Earl and the rest of the group hone in the sprawling, psychedelic tendencies that continually pushed their way to the surface on their previous release, resulting in songs like this one—concise, tightly arranged and bristling with a relaxed energy that makes it all sound easy.
Buy: Bend Beyond

"Idiom Wind" - Zammuto
Though it lacks the collage of samples that has characterized Nick Zammuto's past output, "Idiom Wind" is crafted with the same sentimental undertones that permeated the Books' best work. With his collaborators at his back, Zammuto fleshes out his thin vocals with a cascade of strings and exuberant percussion, proving himself as an intriguingly unconventional songwriter.
Buy: Zammuto

Keep your eyes peeled for my Favorite Records of 2012. While you're waiting, listen to this.
Posted by Zach L. at 10:03 PM