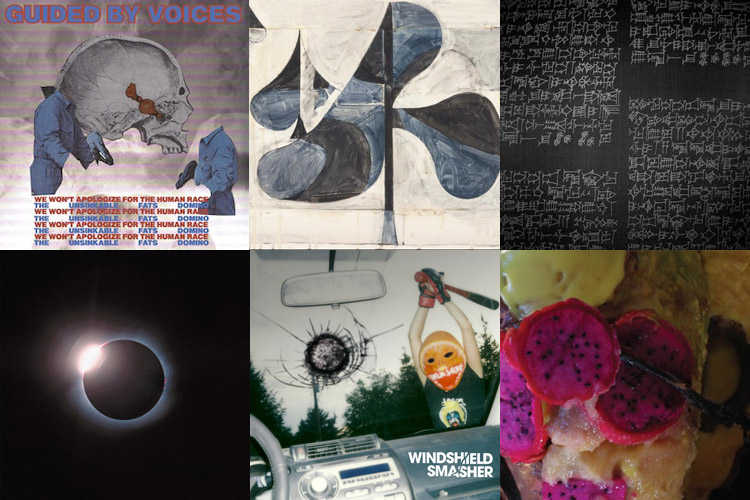 Can you feel that chill in the air? It must be time for the annual flurry of year-end lists. Following the precedent I set forth with last year's volley of meticulously annotated inventories, I'll be presenting my 40 favorite tracks of 2012 in two parts, followed by a list of my favorite albums released over the past year. I'll also be including the obligatory Spotify playlists for those of you who would prefer to listen to music instead of reading about it.

So, here we go. There were plenty of tunes to sift through, culled from twelve months worth of cuts from old friends and new acquaintances. At the end of the year, these were (half of) the songs that stuck with me:

"Hostages" - A.C. Newman
With the New Pornographers on another indefinite hiatus, Newman takes on an appropriately reflective tone on this flute-adorned cut from his latest solo release. Pondering the unpredictable twists and turns of life amid the track's sparse, rhythmic trappings, the onset of middle age clearly hasn't effected this singer-songwriter's ability to compose tunes that you can't help but hum along to.
Buy: Shut Down The Sreets

"Breezeblocks" - Alt-J
Gentle verses bleed into earnest choruses on this Where The Wild Things Are-inspired cut from the group's much-lauded debut. There's a childlike quality to the burbling wordplay that populates the song before it swiftly shifts gears and blossoms into a heartfelt lament. What better way to entice a scorned lover than by threatening to eat them whole?
Buy: An Awesome Wave

"Near Death Experience Experience" - Andrew Bird
Break It Yourself marks a return to form for Bird, and nowhere is that more apparent than on this track—one that tackles familiar motifs like airplane crashes and the inevitability of death. The violinist unleashes his arsenal of looped phrases and whistled melodies against Martin Dosh's shuffling beat, resulting in a song that—much like the dancing cancer survivors mentioned in its chorus—invokes joy in the purest fashion.
Buy: Break It Yourself

"Applesauce" - Animal Collective
Though it's as cluttered and disjointed as the album from which it is culled, not even Animal Collective can hide the deceptively straightforward pop construction of this track with squeals of noise and bubbling distortion. "When you think you don't know / you don't know what comes next," Avey Tare repeatedly yelps, highlighting the unexpected nature of one of the band's finest moments.
Buy: Centipede Hz

"The Ratcatcher" - Antibalas
If the syncopated horn riff at the beginning of this song doesn't elicit a few taps of your toe, you're missing out. The afrobeat ensemble goes for broke on this eight-minute tour de force from their self-titled release, showcasing all of the group's key players before allowing lead singer Amayo to launch into his rhythmic tale. With a host of Daptone players contributing to the track, there are plenty of chops on display.
Buy: Antibalas

"Other People" - Beach House
Beach House is kind of like Taco Bell; it has been making new things out of the same few ingredients for quite a while now. While "Other People" certainly doesn't add anything to the group's palette, it does find a way of breathing fresh life into their formula. Those pregnant pauses that Victoria Legrand takes before dipping into the track's lush choruses are akin to the creamy pepper jack sauce atop a Cheesy Gordita Crunch.
Buy: Bloom

"Windshield Smasher" - Black Moth Super Rainbow
While the latest record from Tobacco and his band of collaborators doesn't quite live up to their past work, this song serves as a fitting introduction to the group's brash new sound. Vocoded vocals drift over the crunching guitar chords and pulsing synths that underpin the song. While hints of the psychedelic trappings that once characterized the output of BMSR remain, "Windshield Smasher" is a brash introduction to the group's bold new direction.
Buy: Cobra Juicy

"Working Titles" - Damien Jurado
You can hear Jurado's experience as a singer-songwriter, both in the way he structures his work and the deeply personal subject-matter of this particular track. Teaming with Richard Swift, who fleshes the tune out with backing vocals and twinkling keys, the pair aggrandize Jurado's simple guitar strums but are careful not overshadow his understated lyricism concerning the intangible power of the written word.
Buy: Maraqopa

"Tell Me" - Dark Dark Dark
I can't think of any voice I heard this year that was more haunting than Nona Marie Invie's, particularly on this stand-out track from Who Needs Who. Above a bed of resolute piano chords, the singer clings to the shreds of a failed relationship with a morbidly hopeful lilt. It's all the more impactful when you realize that the guy she's singing about is playing right beside her.
Buy: Who Needs Who

"Who" - David Byrne and St. Vincent
Awash with blaring horns and David Byrne's distinctive drawl, our first taste of the singer's collaboration with St. Vincent songstress Annie Clark was, unfortunately, the best we would get. The pairing makes sense the moment you hear their voices intertwining on the track's appropriately grandiose choruses—the sound of two disparate generations treading common ground.
Buy: Love This Giant

"Gun Has No Trigger" - Dirty Projectors
It's telling that David Longstreth doesn't even have to touch a guitar on this harmony-ridden cut from the group's latest LP, instead allowing the voices of Amber Coffman and Haley Dekle to provide the track's underpinnings. A resolute bass line, impressionistic lyrics and thrilling crescendos only serve to heighten this resplendent pop composition.
Buy: Swing Lo Magellan


"Hail Bop" - Django Django
Tidily encapsulating the English quartet's off-kilter psychedelia, "Hail Bop" introduces a barrage of pulsing synths and jangling melodies before giving way to the group's slightly unsettling vocal harmonies. With a krautrock bounce in their step, the group pays homage to the folktronic style of the Beta Band while still managing to blaze their own trail.
Buy: Django Django

"That Old Black Hole" - Dr. Dog
Few modern bands are as immediately recognizable as Dr. Dog, a group characterized by lush arrangements and tuneful refrains that jump from the speakers. On "That Old Black Hole," Scott McMicken wraps his oftentimes nonsensical lyrics around a shifting arrangement, deriving both meaning and solace from the absurd.
Buy: Be The Void

"Property Lines" - Dusted
A sparse record that channels Neil Young seems like an odd career choice for Holy Fuck frontman Brian Borcherdt. However, when you hear the way he reaches for the high notes and lays on the crunchy distortion, it makes a little more sense. Just don't come expecting any dance beats.
Buy: Total Dust

"Tusk" - Errors
Like some sort of digital fanfare, the electro-tinged Scottish trio burst to life in a deftly arranged cloud of synth flourishes and whining guitar lines. Heralding the commencement of the first of their two releases this year, the group basks in their signature retro-futurist sound, residing somewhere between a digitized past and an idealized future.
Buy: Have Some Faith In Magic

"Werewolf" - Fiona Apple
With a piano and a batch of biting analogies at her disposal, Fiona Apple tears into this short tune with a simmering vitriol. It's the track's subtleties that make it truly captivating, from the sudden stabs of bass and drums to the inexplicable field recordings lingering in the background. "Nothing wrong when a song ends in a minor key," she casually intones before pulling off that very feat.
Buy: The Idler Wheel Is Wiser...

"Wolf" - First Aid Kit
Frustratingly relegated to an iTunes bonus track, this haunting tune casts the pristine harmonies of the Swedish sisters against a pounding beat and swelling strings. Evoking a stark, desert landscape, the pair's lonesome howls reverberate throughout the song, at once otherworldly and beauitful.
Buy: The Lion's Roar

"We Drift Like Worried Fire" - Godspeed You! Black Emperor
Easily ranking as one of the year's most welcome surprises, Canada's most revered post-rock ensemble returned to the studio to deliver this sprawling take on the live staple formerly known as "Gamelan." Those familiar with the group's slowly building, multi-layered arrangements will find themselves right at home. The only challenge will be picking your favorite crescendo (I'm partial to the third one.)
Buy: Allelujah! Don't Bend! Ascend!

"Yet Again" - Grizzly Bear
There's a constant feeling of restlessness that permeates "Yet Again," realized by a constantly shifting arrangement that never seems content to coast along. The Brooklyn quartet puts the melody through its paces, wrapping textural accents around an undulating bass line before descending into a cacophony of rhythm and noise. Handily ranking among the more memorable moments in their catalog, Grizzly Bear make it sound easy.
Buy: Shields

"The Unsinkable Fats Domino" - Guided By Voices
Over before you realize it but long enough to long enough to make a lasting impression, "The Unsinkable Fats Domino" fits the template of the majority of Robert Pollard's most memorable compositions. Easing back into the tuneful, absurdism that they're best known for, the second coming of Guided By Voices sounds no worse for the wear.
Buy: Let's Go Eat The Factory

Part II is on the way. In the meantime, go listen to this Spotify playlist and imagine the second half of my list.
Posted by Zach L. at 6:56 PM