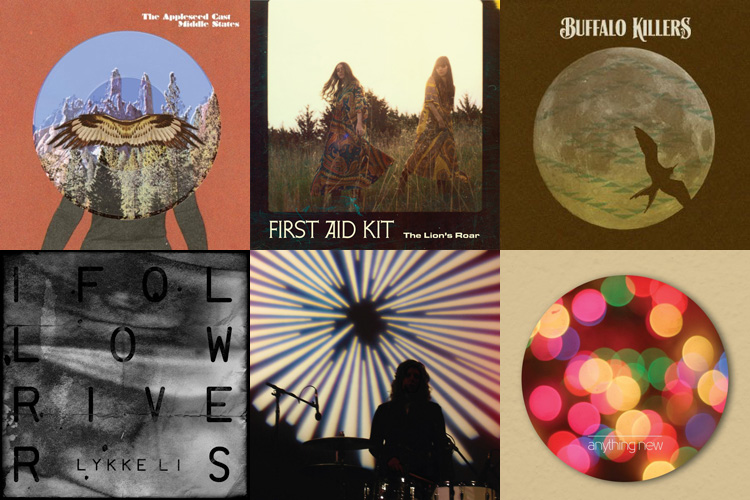 Every year when I sit down to write these lists, I find myself enjoying the process of compiling my favorite tracks more and more. Originally I started making this list as a sort of consolation for my inability to include each and every record I enjoyed on my favorite albums list. Now, I almost feel as if it's the more important and rewarding list—the outlet for my inner DJ, intent on sequencing hour after hour of exemplary music. These are the songs that serenaded a year of intense upheaval, as I left my home state for the bustling city. Each of them are something more that the sum of their chords, melodies and lyrics. They are the 40 songs that accompanied cross-country drives, late night train rides and walks through the neighborhood. In the year 2011, these are the tracks that meant the most to me.


"Another Sky" - Akron/Family
With the psych-folk trio's latest release amounting to a hodge-podge of well-intentioned weirdness, the focused intensity of this track stood out immediately. A primal beat, awash in distortion, presided over by some soothingly reserved vocal work. It's not that it's any less strange than its surroundings, it's how it makes its peculiar parts into something wholly wonderful.
Buy: S/T II: The Cosmic Birth and Journey of Shinju TNT

"Middle States" - The Appleseed Cast
Former emo-purveyors turned post-rock practitioners almost entirely give themselves over to the latter on their latest EP from Graveface Records. The record's title track finds the group drenched in atmosphere, as shimmering guitar lines coalesce against a prominent rhythm section. If this reemergence is a sign of things to come, the group's future sounds like something I'd like to hear.
Buy: Middle States

"Anything New" - Bibio
The stuttering, sample-driven bent of this instantly catchy track from the British producer sounds as if it was tailor made for an Adult Swim bump. There's a reason his music has been showing up in that venue— taken 15-30 seconds at a time, Bibio's calculated hooks loose none of their impact, coming into focus almost immediately. In its entirety, it's a breath of fresh air in the increasingly crowded and homogenized electronic music scene.
Buy: Mind Bokeh

"Drover" - Bill Callahan
How do you make a song about driving cattle compelling? Just put it in the able hands (and voice) of Bill Callahan. The former Smog frontman brings his signature sparse instrumentation to a song that's more western than country. "It takes a strong, strong, it breaks a strong, strong mind," he encapsulates in that rich, world-weary baritone.
Buy: Apocalypse

"Huma Bird" - Buffalo Killers
The Gabbard brothers hit gold once again, mining a nostalgic vein of '70s rock that finds the Cincinnati trio channeling what could almost be mistaken for a harmonically-blessed lost cut from Neil Young and Crazy Horse. It's not new territory for the group, but their well-traveled chops elevate it high above lesser imitators before swooping down much like its legendary, winged namesake.
Buy: 3

"Super Duper Rescue Heads !" - Deerhoof
Awash in twinkling synths, the latest from the California art-rockers takes only seconds to expose its eccentric pop sensibility. Isolating the adorable lyrical delivery of Satomi Matsuzaki, before delving into sweeping choruses and a syncopated bridge, the song takes pleasure in delivering overt weirdness in a shiny, vaguely familiar package.
Buy: Deerhoof vs. Evil

"Sugar Splash" - Delicate Steve
The almost unclassifiable nature of Steve Marion's instrumental studio project leads to analogies such as this: it's like music made by Sunday morning cartoon characters who have eaten entirely too much Captain Crunch. However you describe it, you'll find that constantly intersecting melodies and rhythms provide enough ear candy to ruin your dinner.
Buy: Wondervisions

"Chinatown" - Destroyer
It was the year of the '80s throwback, and Destroyer's Kaputt arguably led the charge, coming out of the gate with soft rock production and gratuitous sax solos. "Chinatown" transcends its somewhat ironic trappings thanks to Dan Bejar's usual off-kilter delivery as well as particularly memorable vocal turn from Sibel Thrasher.
Buy: Kaputt

"All the Sands in All the Seas" - DeVotchKa
Without an overly sappy Canadian indie rock group to write a song fit to grace the most momentous movie trailers of the season, the Denver natives in DeVotchKa ably took up the reins. With its plaintive refrains and unrelenting arrangement, you're almost forced to agree when vocalist Nick Urata yelps "Here's the part that always gets me."
Buy: 100 Lovers

"Black Night" - The Dodos
Armed with a machine gun snare, the Dodos welcome us back with this unwavering, percussive lament. Not stopping for anything, the brisk track loads on the group's unmistakable howls as Long and Kroeber quickly ease into their patent dynamic. On a record dotted with appearances by songstress Neko Case, it's high praise to call this one my favorite of the bunch.
Buy: No Color

"Supertribe" - Errors
Call it post-electro if you must, but just know that Errors' tightly wound instrumentals will probably make you want to dance. Its frolicking chiptune synths meshing with subdued guitars, this track from Rock Action Records signees lands somewhere between the math and post-rock practiced by the group's labelmates. Its general indescribability makes it all the more exciting.
Buy: Come Down With Me

"The Lion's Roar" - First Aid Kit
On their first single from a forthcoming full-lengthed produced by Bright Eyes' Mike Mogis, its easy to label the Swedish duo as a couple of Fleet Foxes devotees. The cascading melodies, the starkly honest lyrics and stirring instrumentation— it's all there. While it wears its influences proudly, it's a striking track that suggests a deeper understanding—one which makes these womens' song wholly their own.
Buy: The Lion's Roar [single]

"Where's My Tribe" - Grandkids
Tucked away on an EP that was quietly released digitally is this hauntingly beautiful little tune, intoned by the equally wonderful voice of Vivian McConnell. Anchored by intricate rhythms and plucked melodies, it doesn't really matter that the titular tribe is so elusive, especially when the search proves to be this stirring.
Buy: Sister Walls

"Roger Miller" - LAKE
It takes a certain kind of band to pen a song dedicated to a mid-'60s novelty songwriter, but LAKE is just that sort of group. Building off of the simple yet rich arrangements of 2009's Let's Build a Roof, the requisite combination of rhodes and horns are present on this track. "If I were a song, then I would be his song,"croons Ashley Eriksson, replete with a sense of conviction that is wholly believable.
Buy: Giving and Receiving

"Cold Feet" - Liam Finn
If you've ever seen Liam Finn in concert you'll know that he splits his time between being an unassuming New Zealander and a complete mad man with a propensity for drum solos. On record, that dichotomy isn't well represented, but this particularly earnest track from FOMO hints at reality with sudden switches from languishing verses to impassioned refrains. If you haven't heard it, you should let your Fear Of Missing Out get the better of you.
Buy: FOMO

"Try To Sleep" - Low
I'm not sure if Alan Sparhawk set out to write the world's coolest lullaby, but it's a feat a achieved with this track from the slowcore group's latest effort. With chugging chords overlaid by tinkling glockenspiel and the warm harmonies of bandmate Mimi Parker, you'll likely be too enraptured by it to actually doze off.
Buy: C'mon

"I Follow Rivers" - Lykke Li
Picture a smokey room, filled with pale, spindly Swedish women in baggy black H&M clothing. It's the imagery that comes to mind the second this song gets started, and no shock if you've seen Lykke Li live. This moody pop number wades through murky pools of organ before exploding into its cathartic chorus, helped along by gossamer strains of guitar. Now if I could only learn how to pronounce her name...
Buy: Wounded Rhymes

"House of Circles" - Mr. Gnome
The sprawling centerpiece of the Cleveland duo's latest record find them touching on just about every permutation of their sound in the span of just over six minutes. From the breathily delivered persistence of it's opening moments to the shoegaze blare of its bridge. Its heavy-handed conclusion is fitting, bringing Nicole Barille considerable vocal prowess to the forefront just before coming full circle.
Buy: Madness in Miniature

"San Pedro" - Mogwai
Driving forward with reckless abandon, "San Pedro" solidifies itself as the closest thing to a pop rock statement to come from the stalwart post-rockers of Mogwai in quite some time. With riff crashing upon riff, the Scottish distortion warriors make a convincing case for just how hardcore they really are.
Buy: Hardcore Will Never Die, But You Will

Listen to the majority of these tracks on my dedicated Spotify playlist, and check back soon for Part II.
Posted by Zach L. at 10:00 AM