Tapes on the Floor's Favorite Tracks of 2011 (Part II) 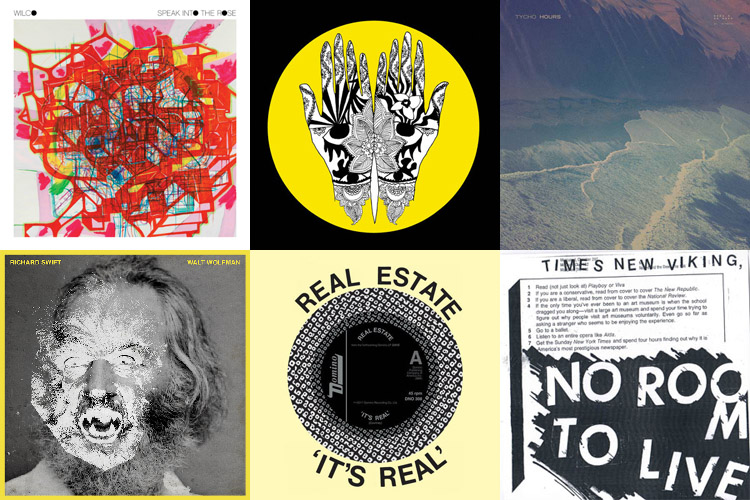 I hope you caught the first part of my favorite 40 tracks of 2011, because we're on to the second half of the list. If you'd like to listen along, check out my Spotify playlists which contain all but a few of the tracks from both the first and second parts of the list. Let's finish this off— here are the rest of the songs from the past year that caught my ear and didn't let go.


"In This Grass" - Raleigh Moncrief
Much like Anticon labelmate Baths, the music of producer turned musician Raleigh Moncrief takes pleasure in blurring the line between electronic and acoustic. On this almost entirely instrumental track from his debut, strummed guitars merge with warbling synths against a thumping beat. The hooks come frequently and oftentimes unexpectedly, challenging your expectations to the very end.
Buy: Watered Lawn

"It's Real" - Real Estate
I think I've probably heard this song run through my mind more times than I've actually listened to it, which is a testament to just how infectious it really is. These New Jersey boys bring a quick tempo and deceivingly simple riff to the table, descending into some of the most delightful guitar rock you're likely to hear until they finish their next record.
Buy: Days

"Whitman" - Richard Swift
Swift has been sitting behind the mixing board far more than he's been in front of a piano as of late, making his latest EP something of a treat. The persistent beat of this opening track isn't as nuanced as some of his past work, but with his distinctive voice in the forefront and his usual array of cutting room flourishes in tow, you can't help but be glad to be hearing from him once again.
Buy: Walt Wolfman

"Mládek" - Russian Circles
As one the most reliable source of metal-tinged post-rock dirges over the past few years, the Chicago trio doesn't disappoint with their latest release. "Mládek" quickly establishes itself as one of the records more varied offerings, slowly building from brooding atmospherics to a fast-paced, thrashing crescendo. It all deftly treads the line between epic and over-the-top.
Buy: Empros

"Danger" - Sallie Ford and the Sound Outside
It'd be tempting to say that Sallie Ford was born in the wrong decade, but her distinctive, jazz singer-like delivery is a revelation in the modern musical landscape. Set against the buoyant rockabilly of her Portland-derived band, Ford's voice creates a sound somewhere between that of the past and the relative present. The only thing dangerous about listening to this track is not giving it a chance to reel you in.
Buy: Dirty Radio

"Cold Front Blues" - Southeast Engine
The Athens, OH folk rockers had a quietly triumphant year, with their latest record garnering intense critical praise nationwide. It's fitting that the album's best track retains a similar sense of modesty—a simple, bluesy stomp about hard times and freezing weather set to a tinkling piano. "Ain't that the way things go..." belts out a characteristically earnest Adam Remnant, ever cheerful in the face of hardship.
Buy: Canary

"Tigers" - Stephen Malkmus and the Jicks
Perhaps it was the the summer spent on the road with his old band, but the latest from Malkmus comes the closest to capturing Pavement's glory days than any record he's made since their split. Nowhere is this more evident than on the album's first track, an efficient rock dity built around a tuneful hook and some of the most joyfully inane lyrics Malkmus has penned in quite some time. Something tells me we have Beck to thank...
Buy: Mirror Traffic

"Screws Get Loose" - Those Darlins
I'll forever remember Those Darlins as a rowdy group of girls who break bones partying too hard after shows. It's why an undeniably fun track like this one works so well— these ladies are used to rolling with the punches, just listen to that detuned guitar solo. Honestly, there's nothing loose about this song—it's all tight hooks and good times.
Buy: Screws Get Loose

"No Room To Live" - Times New Viking
"I just wanted someone else to do all the monkey crap," Times New Viking guitarist Jared Phillips told me, referring to the group's decision to hit the studio. The results are some of the best tracks the band has put to tape, especially this one, a mournful pop song made of droning organs and pulsing drums. At two minutes long, it's a bite sized chunk of minimalistic brilliance begging to be put on loop.
Buy: Dancer Equired

"New Beat" - Toro y Moi
Ditching the chillwave trappings of his debut, Chazwick Bundick recast himself as an electro-funk troubadour with this song from his latest record. Immaculately selected synths flesh out a rousing tune that quickly solidifies itself as a marked evolution from the project's electronic beginnings. Keep it up Bundick— the people need to dance.
Buy: Underneath the Pine

"Bizness" - tUnE-yArDs
If there was one artist who stood out from the pack this year, it was the fearlessly jovial Merrill Garbus. Armed with looping pedals, drums and a magnificent set of pipes, the shuffling strains of "Bizness" take form almost of their own accord. When the triumphant sax line hits, it does so like an epiphany— I'm not sure what Garbus tapped into, but whatever it is, I hope she keeps it coming.
Buy: w h o k i l l

"Will Do" - TV On The Radio
The Brooklyn quintet's latest was a rather sullen affair, and it's lead single didn't stray far from that mandate. Resigning themselves to an resolute beat, Tunde and company build a melancholy love song from the ground up. Stay for the madcap bridge and final choruses— it's some of the more transcendent stuff this group has ever achieved.
Buy: Nine Types of Light

"Capital Gains" - TW Walsh
You may know Walsh from his days as one of the core members of the now-defunt Pedro the Lion. On  this track from his first true solo album in some years, Walsh delivers a perfectly mixed, minimalistic tune that floats effortlessly into your ears. His restrained chords lay delicately atop a walking bass line that hits in all the right places, namely the cathartic refrains. It all begs the question: when did songs about taxes become so beautiful?
Buy: Songs of Pain and Leisure

"Hours" - Tycho
Dripping with an atmospheric quality that transcends its outwardly trance-like appearances, this track from Tycho's latest is a synth-lover's wet dream. The steadily building arrangement voices itself electronically, as glittering, modulated sequences lay themselves out over tightly-crafted rhythms. If Ridley Scott is really going to make that Blade Runner sequel, this guy deserves a crack at the soundtrack.
Buy: Dive

"The Floor" - Ty Segall
No longer content limiting himself to two-minute fuzzed-out bursts of garage rock, Segall's latest found him stretching his legs a bit. Built around an exuberant, winding guitar lick that intermittently sinks into a sludgy chorus, it's an exciting and patently catchy bout of songwriting from a guy who seems pleased with his newfound ability to let the tape roll.
Buy: Goodbye Bread

"It's Him!" - White Denim
In less self-assured hands, the twisting structure of this song would inevitably be stretched well past the three-minute mark. But these Austin, TX rockers know exactly when to reign things in, easily making them the most succinct jam band around. Its down-home stomp contrasting with dashes of psychedelia, you won't be able to forget this groove.
Buy: D

"Art of Almost" - Wilco
No stranger than the group's past flirtations with krautrock and ten-minute drones, the opening track of Wilco's latest album stands as their most vital and exciting recording in quite some time. With Jorgensen's synths forming a persistent bed for Tweedy's beautifully nonsensical lyrics and a positively wailing solo from Cline, it's just about everything you didn't know you could ask for from a new Wilco tune.
Buy: The Whole Love

"Romance" - Wild Flag
If there was only one perfect pop rock song crafted this year, it might be this one. Carrie Brownstein calls out across the galloping arrangement, leading her bandmates to a divine chorus bristling with fretboard-derived energy. If you were lucky enough to see it performed live within the past year, you know that it's a song that doesn't lose any of its magic onstage.
Buy: Wild Flag

"Pushing Onlys" - Woods
Armed with warbling guitars and an unmistakable falsetto, Jeremy Earl and his band of Brooklynites turn in yet another slice of lo-fi folk rock goodness with this track. Flirting with psychedelia, it's a song that manages to evoke a not-quite-otherworldly sense of pastoral bliss. Whether its warmth derives from homemade charm or the simplistic arrangement, it's positively radiating with good vibes.
Buy: Sun and Shade

"Georgia" - Yuck
Somehow managing to mash together the best parts of '90s indie rock, Yuck are imitators who embrace familiarity. On this track, it shows through as some sort of strange amalgamation of Superchunk, Yo La Tengo and Sonic Youth with Daniel Blumberg and Mariko Doi singing in unison over some sludgy chords. Whether it brings back memories or creates new ones, it's the rare type of nostalgia that satisfies instead of ultimately disappointing.
Buy: Yuck


Still to come, my favorite albums of 2011— guaranteed to be revealed before the ball drops.
Posted by Zach L. at 9:33 AM