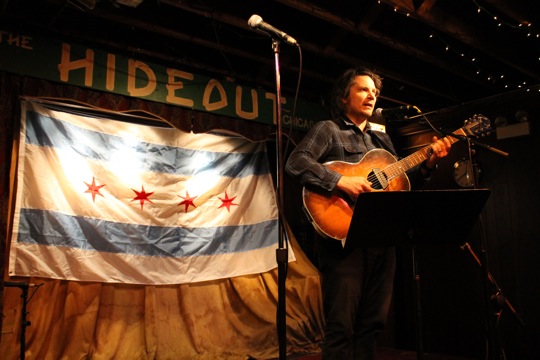 Fear not gentle readers. If you've paid any attention to my Twitter feed or scanned the bylines on Time Out Chicago, you'll know that I am alive and well. Tapes on the Floor isn't dead, it just went on an extended (and, perhaps, well deserved?) hiatus. If the classic lineup of Guided By Voices can get back together and make a new record, you can watch me jumpstart this dusty corner of the internet.


So what sort of things have I been up to these past few months? A fair question. Upon arriving in Chicago, I immediately jumped into the exciting world of freelance writing, covering concerts for the good folks over at Time Out. I caught a wonderful outdoor performance from the reunited original lineup of the Jayhawks, narrowly avoided being swallowed by a mosh pit during a post-Lollapalooza set from the Black Lips and celebrated Pearl Jam's 20th anniversary with over 37,000 fans. I went to my first show at the Chicago Theatre, catching one of the first shows on Bon Iver's national tour behind their latest, self-titled record, backed by tremendous players such as Mike Lewis and Colin Stetson. I was in the right place at the right time, managing to document a surprise set from Jeff Tweedy that found the frontman channeling his inner pop-star while performing the songs of the Black Eyed Peas (coincidentally, I helped record an in-office session with the Autumn Defense on the very same day.) I took a trip back to Wizard World Chicago Comic Con, walking the floor with all manner of costumed heros and bearing witness to an amazing Q&A with the formidable Bruce Campbell. I crossed paths with several bands from my home state, namely Southeast Engine and Buffalo Killers. More recently, I watched Dosh open up for Black Moth Super Rainbow at the Metro, witnessed the second coming of Archers of Loaf at A.V. Fest and saw Dan Deacon perform in a circus tent. 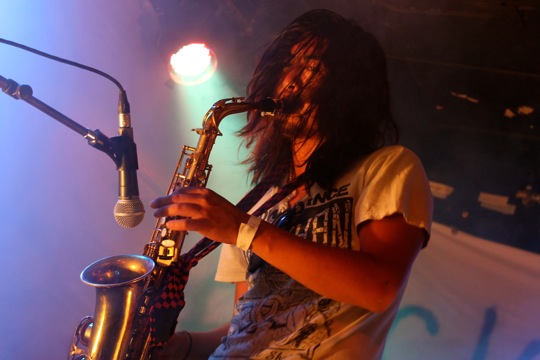 Yes, it's been a whirlwind of a summer, and the excitement shows no sign of stopping. This weekend, I'm headed down to Champaign-Urbana, IL to cover several shows at the Pygmalion Music Festival. Friends of the blog Grandkids are opening for the Dodos on Friday night, and the locally-based Polyvinyl Records will be celebrating their 15th anniversary on Saturday with sets from the likes of Deerhoof, Braid, Japandroids, Asobi Seksu, Joan of Arc and many, many more. Later this fall, I'm especially looking forward to seeing Calexico, Megafaun, Ty Segall, the Besnard Lakes, Dum Dum Girls, Black Angels and Deer Tick. In December, I'm hoping I'll be able to snag tickets to the National at the Aragon Ballroom and, of course, Wilco's return to Chicago at the beautiful Civic Opera House. There's no shortage of great live music in this town, and I'm extremely lucky to have such unfettered access to it all.

Although I spend most of my days sitting in coffee shops pounding away on my laptop, I'm going to make a concentrated effort to do some more frequent posting in this venue. Next week, I'll be sharing my review of Wilco's The Whole Love, and after a month with these songs, I think it will be an extremely accurate depiction of the place I feel it holds in their illustrious catalog. In October, I'll be heading back to CMJ in New York City and hope to provide another blow-by-blow report of all the details I can remember from what is likely to be a nearly sleepless four days of non-stop music. Later this winter, I'm hoping to do a pictorial piece on Pieholden Suite, the former studio of the late Jay Bennett which recently moved back to Chicago and is playing host to the recording of new material from the likes of Santah and Grandkids. I had the chance to visit the new location earlier this summer, played one of Jay's old pianos and basked in the histories contained within the studio's nondescript walls. And of course, no year can go by without the obligatory retrospective, which will find me spouting off my favorite albums and tracks of 2011. I recently had a preliminary conversation about said lists during a car ride with my good friend Brian Wiebe and was quickly reminded of all the great releases that this past year has seen.

Additionally, I've recently started a Tumblr bearing the name of my solo musical project, Longrifle, which will feature my self-recorded compositions as well as assorted visual and audio artifacts from around the internet. If that's not enough to make you sick of me, you've got much larger problems.