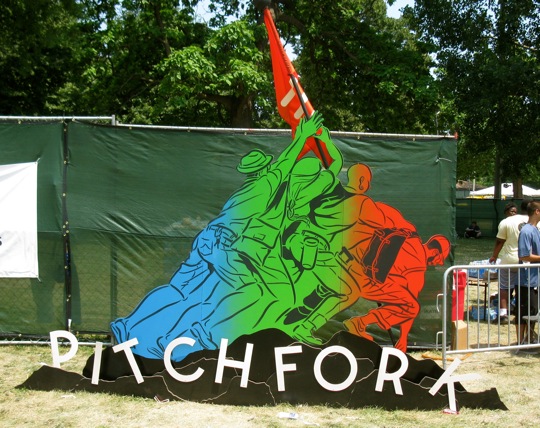 For the second occasion in about a month's time, I got to do something that doesn't happen very often these days. Just as was the case at Solid Sound in June, I got to attend the Pitchfork Music Festival with no other agenda than to enjoy myself. And despite some high temperatures, beating sun and generally sweaty conditions, I did just that. It was actually my favorite Pitchfork Festival since the 2009 edition, thanks to some wonderful booking choices and crowds that seemed slightly more manageable than last year's wall-to-wall swarm. Force of habit meant I couldn't see live music without taking a few notes here and there, so I present you with with my abridged highlights of the weekend in Union Park. 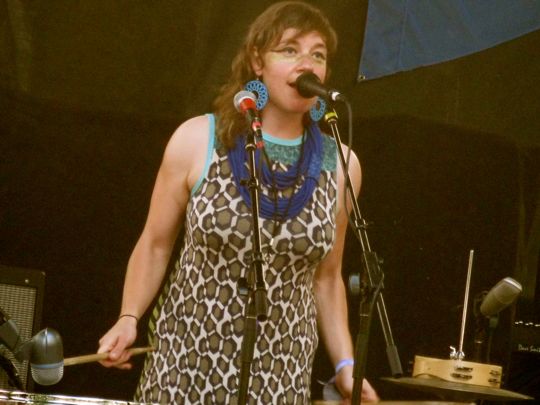 Friday started promisingly with a wonderful set from tUnE-yArDs, an act that I've been trying to catch live since seeing some video's of Merrill Garbus' performances at this year's SXSW. Prior to the show, face paint circulated throughout the crowd as Garbus soundchecked and then launched into a set that was heavy on cuts from her breakout release w h o k i l l.  I was immediately impressed by how much of the sound in purely Garbus, deftly switching between a duo of looping pedals that allowed her to simultaneously layer vocals and drums. The mid-set performance of "Bizness" was the undisputed pinnacle, as two saxophonists were let loose over Garbus' looped-backing track. Despite a set that seemed all too short, tUnE-yArDs delivered and made me look forward to seeing them in a proper venue. 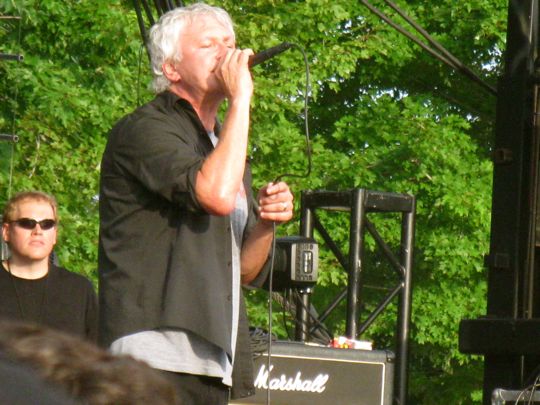 Guided By Voices late afternoon set was a second helping of the reunited rock legends that I had the pleasure of seeing in Newport, KY this past October. The band brought Neko Case to the stage to handle backing vocals on opening song "Echoes Myron," but unfortunately she was a barely audible presence. Robert Pollard and company made it through 19 songs in their 40 minute set, providing rapid fire bursts of pop rock bliss. The set was heavy on cuts from Alien Lanes and Bee Thousand, but that was to be expected from the self-termed'classic lineup.' Pollard was full of energy as usual, reveling in his frontman duties with plenty of mic twirling, air-kicking and Cuervo swigging. It was a fond farewell to a group I never thought I'd get the chance to see live, let alone twice.

I've never been a huge devotee of Animal Collective, and their closing set on Friday night didn't do much to sway my opinion of them. Backed by a huge pink (skull?) backdrop and surrounded by crystalline fixtures that evoked a Superman movie set, the quartet wound their way through a set that leaned heavily on what I was told was new material. I've appreciated bits and pieces of the group's past discography, but in the live setting their new tracks sounded like a band struggling to be weird for the sake of being weird. Samples were garbled beyond recognition and vocals were put through a wavering filter that made them sound as if they were underwater. Performances of "Did You See the Words" and "Brothersport" were enjoyable enough (and the encore of "Summertime Clothes" was almost obligatory) but I could help but feel like I watched a practice session instead of a concert. 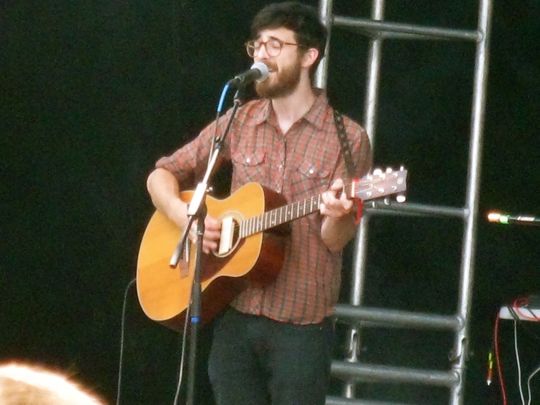 Saturday morning began with the beautiful, folky sounds of Woods who played from their latest record Sun and Shade, the former of which there was a great deal of at the festival, which inevitably sent me searching for the latter. Members of former Woodsist-signees Real Estate sat in on a couple of songs, begging the question as to why they weren't invited back to the fest for a second year in a row (you know, like Kurt Vile?) The gently intertwining riffs of latest single "Pushing Onlys" were a highlight, as was "Suffering Season," one of my favorite tracks from their 2010 release At Echo Lake. 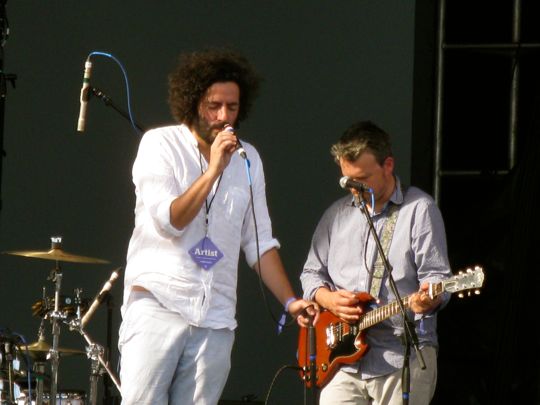 In between drinking bottle after bottle of water, I managed to catch the majority of Destroyer's set out in the main field. Dan Bejar's outfit layered on the '80s influence, delivering a set that basked in the tone set by their recent LP Kaputt. Bejar's off-kilter delivery formed an oddly appropriate union with the soft-rock saxophones and glittering synths present on "Chinatown" and title-track "Kaputt." After a brief respite from the heat, I found myself looking on as DJ Shadow went behind his digital turntables on the same stage. Well, the majority of the set was actually spent staring at a giant ball that held the DJ inside it. Apparently there were projections running across its surface, but the late afternoon sun made them impossible to make out. I didn't recognize much of the set save for the familiar strains of "Building Steam" and "Organ Donor," but it was kind of cool to catch a few fleeting glimpses of their originator.

Saturday ended with a hotly (literally) anticipated set from folk rock savants Fleet Foxes, drawing the largest crowd of the weekend thus far. I was prepared to be impressed by the vocal harmonies and instrumentation, but was bit taken aback by just how tight this group was onstage. The workmanship that showed through on Helplessness Blues translated to the stage, resulting in spot-on renditions of tracks such as "Grown Ocean" and "Bedouin Dress." Older cuts were equally impressive, specifically Robin Pecknold's heartfelt delivery of "He Doesn't Know Why." The only glaring omission from the night's setlist was "Montezuma," arguably one of the strongest tracks on their latest LP. 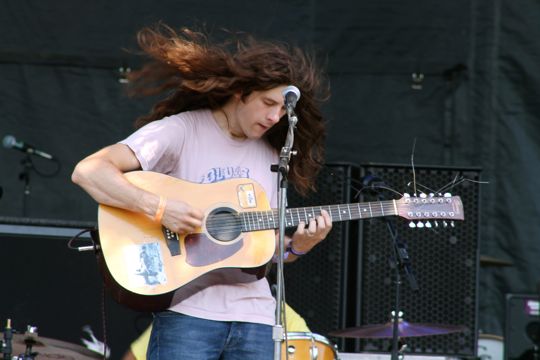 Yuck kicked off my Sunday with an ample helping of their '90s throwback sound, sporting one of the best mixes on the stage all weekend long—not a year goes by that I don't lament sub-par festival mixing. Next on the docket was a set from Philadelphia shredder Kurt Vile, who blazed through beefed up tracks from his acclaimed Smoke Ring For My Halo LP. Vile was so intent on splitting eardrums that we eschewed a bassist in favor of a three guitar assault— a wise choice, if you ask me. By contrast Ariel Pink's Haunted Graffiti disappointed because of some very unwise choices— namely the use of microphone head set by Pink, which resulted in many inaudible moments and generally unpleasant distortion.

Superchunk was next— an appropriate second meeting with the group considering that I saw them for my first time here in Chicago last summer. Mac McCaughan and company blew through a career-spanning set, punctuated with a rendition of their debut single, "Slack Motherfucker." Up next was Deerhunter who delivered my absolute favorite performance of the weekend, awash in reverb and delay. Bradford Cox wasn't wearing a dress, but the shoegazey takes on tracks "Hazel Street" and "Nothing Ever Happened" provided all the requisite wonderful weirdness. TV on the Radio closed out the festival, but due to a prior engagement, I didn't stick around for much more than the hazy melancholy of "Will Do."

Say what you will about the brand behind the festival, but Pitchfork has consistently delivered wildly diverse lineups and this year was no exception. For those willing to brave the heat, it was an exemplary sampling of some of the more exciting music from the present and past. I'll admit it, I'm a sucker for this festival. I'll see you next year.
Posted by Zach L. at 1:27 PM