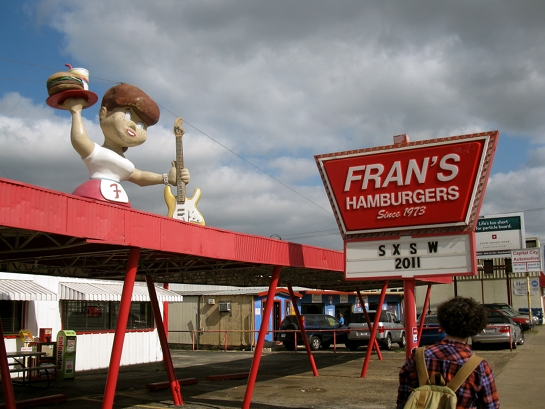 Reading through the various SXSW wrap-ups that have been hitting the web over the past week or so, I feel as if my experience differed quite drastically from those of many of the journalists covering the festival. Sure, I managed to walk by an Odd Future show in progress, but I certainly didn't catch any sets from the Strokes, Kanye West or even the girls in Wild Flag. That's one of the things that makes city-spanning events like SXSW so great—one has the ability to tailor every waking moment to their current tastes and whims. For five days, Austin plays host to every musical genre under the sun, in both official and unofficial settings that stretch all the way across town. I may have not had the full experience, but in between finding my way around, getting slightly sloshed and running into friends, I managed to see some pretty great bands during my two-day taste of the SXSW festivities. 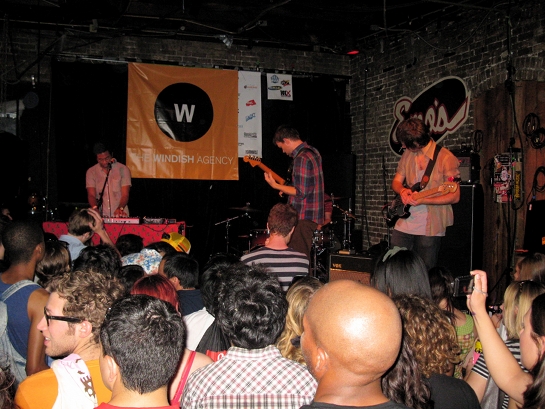 After driving through the day (and night) on Thursday, my traveling party and I arrived in Austin Friday morning all bleary-eyed and decidedly not bushy-tailed. But when free music beckons, one answers the call. We made our way into Austin, descending upon the city from the South and winding our way into the relatively calm streets downtown before finding our way to Emo's for the Windish Agency day party. The free malt liquor was already flowing, and before too long Cults took the stage and made their way through a set of jangly indie pop. As that wrapped up, I headed indoors to check out my first big act of the day—a set from the decidedly ex-chillwave Toro Y Moi. Their latest, Underneath the Pine, left me wondering how it would translate in a live setting, but with the help of a backing band, Chaz Bundick's funk-infused tracks were as tight and energetic as they needed to be.
I high-tailed it next door to Barbarella for the Brooklyn Vegan bash in time to catch a set from Shilpa Ray and Her Happy Hookers. At one point during the set Shilpa confessed to the crowd that she was totally plastered—at 3 PM on a Friday afternoon, mind you. Could have fooled me. I guess being more than a little drunk helps when your playing songs from a record as raucous as her self-titled debut. After Shilpa wrapped up, I tried making my way out back to see Deer Tick but was met by a sea of people packed in like sardines who were likely staking their claim for the Middle Brother show later that afternoon. I decided to head back inside and see Vetiver, who debuted a couple of new tracks while playing through some choice cuts from their past two records. 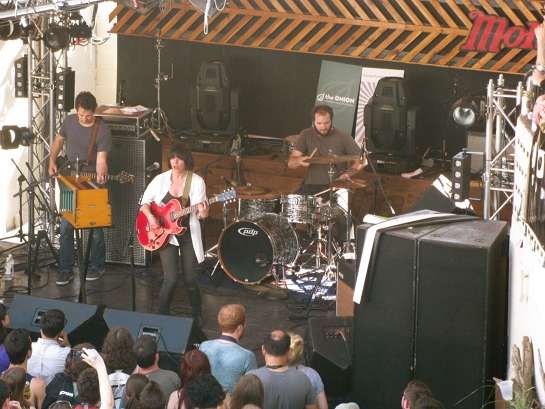 Moving on down the street to the A.V. Club's party at Mohawk, I walked in on Sharon Van Etten in the middle of her set. I watched for a bit and was generally impressed with how her dynamic with her band has improved since I last saw her earlier this year, but after a time I took my leave to see Chikita Violenta on the indoor stage. On record, this group is the Mexican equivalent of Broken Social Scene, thanks in large part to production work from frequent BSS collaborator Dave Newfeld. In concert, the band is much more scrappy, with songs echoing the work of groups like Superchunk and Pavement. In spite of some shoddy mixing, Chikita presented a solid performance that stuck closely to cuts from their new record TRE3S. Up next on the indoor stage was a spectacular set from Low, whose slowcore arrangements stood in stark contrast to every band I'd seen thus far. The group ran through some tracks from their forthcoming release C'mon, and generally basked in their plodding tempos and beautiful vocal harmonies—a welcome respite from the comparative chaos brewing on the streets outside.
After some delicious Chupacabra hot dogs with Team Clermont Steve, we checked out the always-fun Columbus natives Karate Coyote at a free showcase. Ohio was strongly represented at SXSW this year, thanks partially to the aptly-titled Ohio X Southwest party which brought many smaller, Columbus-based acts down to Austin. 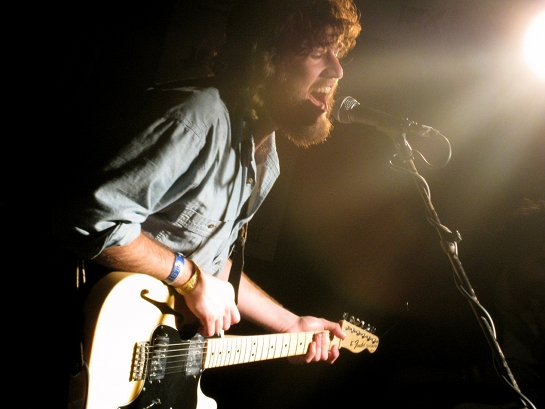 After marveling at just how crowded 6th Street gets during SXSW, it was back indoors for the Nicodemus Agency showcase at Maggie Mae's. The night's first highlight was an amazing solo set from Damien Jurado, a guy with a voice that is endlessly entertaining to listen to, whether he's singing or telling stories. He did a fair bit of both, and even yelled at some particularly talkative folks hanging around the bar. But the music was what was most memorable, even if it did lack the accompaniment that Richard Swift provided on his last record. Up next were Tapes on the Floor favorites (and my reason for attending the showcase in the first place) Santah, who continue to impress me with each successive live performance. The group sounded great, running through the usual selection of tracks from White Noise Bed as well as some new tunes, including their ode to Chicago entitled "North Coast." Rumor has it the band just got signed, so chances are you'll be able to nab a fancy copy of their record within the year—I'm crossing my fingers for a vinyl release! 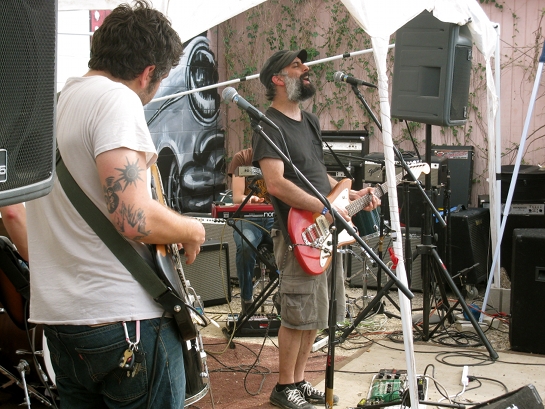 We managed to drag ourselves out of bed Saturday morning and make our way to the East Side Drive In for the Mess With Texas Party, which could be more aptly described as a mini-festival on the outskirts of Austin. I stuck around long enough to see most of Gentleman Jesse and His Men, but then promptly hoofed it over to yet another drive in theatre, this one called the Blue Starlite Mini Urban Drive In. And miniature it was, filled with tiny cars and a little screen painted on the back wall of some building. The reason for my attendance? Graveface Records was showcasing three bands from their roster underneath the sweltering Austin sun. Dreamend started the day out with a woozy collection of tracks stripped down to their essence and performed by Ryan Graveface himself on guitar and a drummer, my favorite of which was a grungy version of "Magnesium Light." Next up was Hospital Ships, who filled up the relatively small stage area with their expansive roster and burst into joyous songs about friends and rock 'n' roll. Capping off the line-up was the Appleseed Cast who blazed through what could easily be my favorite performance of SXSW. The guitars were appropriately loud and the moody, effects-soaked chords echoed through the miniature surroundings. I'm certainly looking forward to catching them again when they come through Columbus in early May.
Next, I journeyed over to the 40 Watt showcase at Sidebar in time to see Reptar take the stage, bursting into a set of synth-heavy numbers that featured the strikingly odd vocals of Graham Ulicny. About halfway through the set, the tent covering the stage toppled over, but the band didn't miss a beat. To my surprise (and delight) J. Roddy Walston and the Business were the next group on deck, so I stuck around to hear some their piano-driven rock. The long-maned J. Roddy is a force to reckoned with, simultaneously tickling the ivories and yowling his way through many an upbeat ditty. 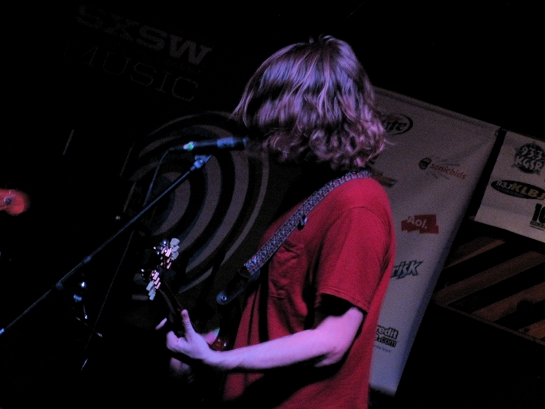 After some delectable beef brisket, it was back over to the Mohawk for the Panache showcase. First on the docket was a set from boisterous chiptune rockers Anamanaguchi, who came with modded Nintendos and some wonderful 8-bit projections in tow. Typically I frown upon the overt use of backing tracks, but the group won me over with live instrumentation which was equally as tight as their pre-programmed accompaniment. Back outside, The Strange Boys were just getting started, making their way through a good majority of their recent Be Brave LP in succinct spurts, while basking in the glow of what seemed like a predominantly hometown crowd. Finally, just before midnight, Ty Segall and his band launched into a set that sent people stage-diving from all manner of balconies and speaker stacks. Barely catching their breath between songs, the group sped through some tracks from their forthcoming Drag City release as well as a few old favorites. Even on a night filled with garage rock, Segall solidified himself as one of the individuals at the forefront of the movement. As the final chords of "Sad Fuzz" faded into the night, I was out the door and on my way to Home Slice before crashing for the evening. 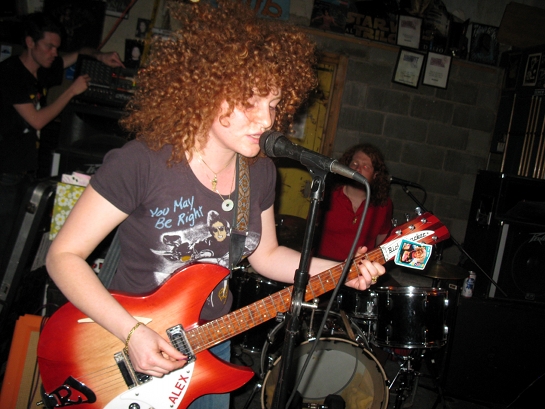 While SXSW may have officially ended on Saturday, an extra day of fun was awaiting anyone who stuck around Austin. We had breakfast at local staple Juan in a Million before heading over to Beerland for the Panache Hangover Party. I caught sets from the likes of Turbo Fruits, Tôg, Heavy Cream, Pujol and the illustrious White Mystery. Capped off with ribs at the legendary Stubb's BBQ, it wasn't a half-bad way to spend a Sunday.

Final thoughts on my first trip to Austin for SXSW? Pretty damn fun. I'll be back again soon, if only for some more of Torchy's Tacos.
Posted by Zach L. at 10:00 AM