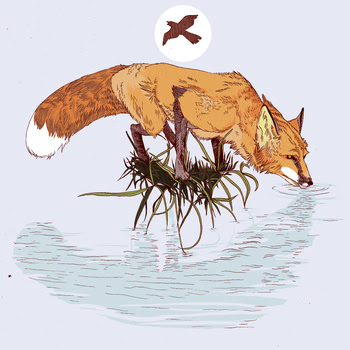 Like the slender fox that graces its cover, Grandkids' Sister Walls EP is a poised and calculating beast, its taut muscles rippling with waves of melodious capacity. It's enough to make your fur stand on end. But that's to be expected from Vivian McConnell, the proprietor of a beautiful voice most often found belting out harmonies for Chicago folk-rockers Santah. With her compatriots in Grandkids, those dulcet tones are brought to the foreground, resting gingerly on the shoulders of the group's gently flowing arrangements.

It starts simply enough with the Fahey-esque fingerpicking of opening track "Where's My Tribe," quickly joined by the forceful yet restrained bowing of Adam Gorcowski on cello. It's uncommon to find a group so ably anchored by this ample, stringed instrument, but Gorcowski proves its merit as he capably lays a foundation for his bandmates to embellish upon. That exact sort of subtle aggrandizement takes place over the course of "Clocktower," as McConnell's tranquil cadence floats above a bed of slowly building instrumentation. With its glistening guitars and faint rhythms, its arrangement echoes the lyrical conceit of being "stuck in golden honeytime." After a short interlude, "As the Gull Flies" finds the titular bird squealing above the bay as McConnell's voice laps against the shore. The song crests and settles into a swaying, oceanic groove—marooning the listener on an island with nothing more than this idyllic tune. It's arguably the most stripped-down track on the record, but the palpable sense of intimacy that results is unmatched. For the finale, the group lets loose on "Geese," a somewhat silly, upbeat number that serves as a kind of cathartic release in light of the more subdued tracks that precede it.

Grandkids forged an identity for themselves on their self-titled, debut EP and on Sister Walls that sound is finessed even further. The quartet turns in a collection of songs that are more restrained in nature, but display an unprecedented level of sophistication. Call it humblecore, call it chamber-pop, call it whatever you like—Sister Walls is a record full of handcrafted, homegrown music with a youthful face and an old soul.

The Sister Walls EP is available as a free download on Grandkids' Bandcamp
Posted by Zach L. at 9:00 AM

In the background, every slot software program is continuously producing random numbers due to the random number turbines . Each number gives a unique end result on the 코인카지노 reels with each spin. When the reels cease spinning, the slot sport works out the worth of the spin based mostly on the numbers and figures, and notifies the gamer.