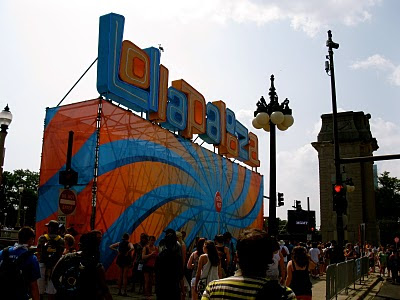 So, I survived the three-day ordeal that is Lollapalooza, managing to see a whole bunch of music, meet up with folks and fulfill my intern duties. I had a way better time than I expected to have, partially because the organizers at this festival make things pretty cushy for members of the press. We got put in a shady, fenced-off area that overlooked the main stage on the south side of the grounds, complete with plenty of gratis food and drink. Compared to the stuffy little tent crammed into a corner that Pitchfork supplied, this place was heavenly. 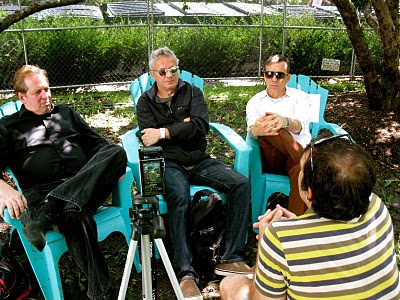 My Friday started out with a brush with Ohio rock-royalty: our first interview of the day was with the legendary Devo. Mark Mothersbaugh, Bob Mothersbaugh (Bob 1) and Bob Casale (Bob 2) sat down with my fearless leader John Dugan for a really insightful conversation on the origins of the group and their continued relevance almost 40 years later. As you can see, Mark did more of the talking for the group, proving himself to be both eloquent and brutally self-aware. I don't count myself as a huge Devo fan, but as a fellow Ohio-native with musical aspirations and someone who is at the very least familiar with their catalog, it was a humbling experience. 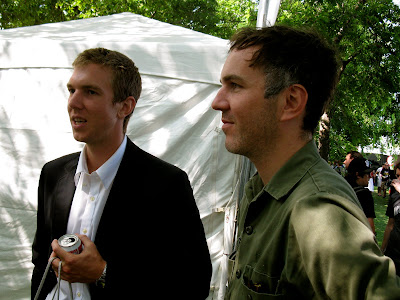 The rest of my day went a little like this: I caught a set from garage-rock quartet the Ettes, who did a fine job of translating their crunchy, bluesy tunes into a gripping live show, complete with some great vocal work from front-woman Lindsay “Coco” Hames. On my way back through the grounds, I managed to see about half of the Walkmen's set, which was extremely impressive. They debuted a good amount of material from their upcoming record Libson, which I've heard and can vouch for as being my favorite thing they've done to date. We did an interview with them a little later in the day and it was really interesting to hear how much material they recorded before culling it down to the tracks that ultimately made the record. I also caught up with Pat Carney backstage who assured me that his Audio Eagle Records imprint wasn't dead, but merely on hiatus. Royal Bangs, the label's most successful group, is on the verge of signing a deal with a bigger indie label, so Carney made it sound like his next step will to be bring some new talent to Audio Eagle (I'm still pulling for the next Brainbow record to come out via the label). 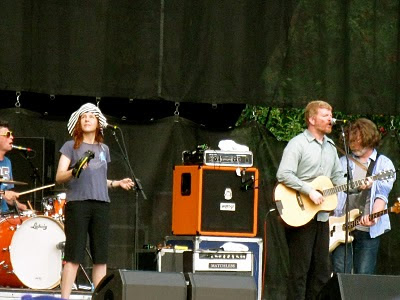 On my next run through the park, I caught a little bit of Peanut Butter Wolf's DJ set as I walked by the all-day rave that is Perry's stage. Appropriately enough, he was spinning Madvillians's "All Caps" before quickly segueing into some J Dilla. Unfortunately, I had to hurry off to cover Cymbals Eat Guitars for TOC, a set in which the group debuted a fair amount of newer material while still hitting all the highlights from their debut LP Why There Are Mountains. As much fun as the morning was, the day really got started as I got into position for The New Pornographers—a band I've seen before, but not with Dan Bejar in tow, as was the case on this particular occasion. I couldn't have asked for a better set, just two songs in they played "Myriad Harbor," one of my favorite Bejar-voiced tunes. Neko Case, decked out in a sun-hat, was an imposing vocal presence as usual, turning in a pitch-perfect version of "Challengers" that sent shivers down my spine (she was the one person I was extremely disappointed I didn't get the chance to meet). The handful of songs that they played from their latest record—"Moves," "Crash Years," "Your Hands (Together)"—also sounded great, but honestly, it was nice to hear such a varied set. 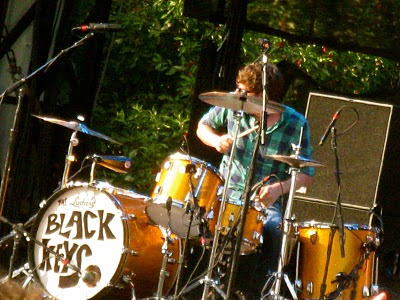 The Black Keys erected a gigantic banner for their set on the north side's main stage, depicting two clasped hands framed by a tire—reminiscent of the gigantic inflatable tire I saw them employ at a festival a couple of years back. The duo started out with some back catalog tracks—"Thickfreakness," "Girl is on My Mind," "Stack Shot Billy"—before bringing a bassist and keyboardist on-stage to delve into some track of their latest LP Brothers. Black Keys purists, say what you will, the expanded line-up lets these guys do so much more and really helps drive home tunes like "Everlasting Light" and "Next Girl." I didn't get to catch their entire set, but I left thoroughly impressed.

Over on the other side of the festival—recall that the press area over-looks the south side's main stage—everyone was getting into a tizzy about Lady Gaga's headlining set. The stage was covered in a gigantic black curtain, which eventually dropped away to reveal a translucent screen, on which—surprise, surprise—Lady Gaga's silhouette was projected on. The screams that went through the crowd were piercing... people were really eating this stuff up. I have no idea what songs were played, but the first 15 minutes or so of the set seemed like pretty standard pop-fare, with intermittent, extremely cheesy attempts at adding a 'narrative' to the proceedings. As the set wore on, Gaga kept stopping between songs to complain about how the kids made fun of her at school, and how no one ever thought she would be headlining Lollapalooza. I'm sure she could afford a great therapist—the ego-trip was just far to much to handle, so I made my way north for the Strokes. (If you would have told me six months ago that I'd halfheartedly write a Lady Gaga review this summer, I would have told you to get out of town)

What can I say about the Strokes? It was pretty cool to see them live, but they were exactly what I expected they'd be—which isn't a bad thing. They sounded great, and they played the songs that everyone came to hear, it was a crowd-pleasing set. Casablancas is still enthralling to listen to as he casually snarls his way through songs like "Reptillia" and "Last Nite." The group wasn't particularly animated, but they had some excellent visuals in back of them, including a really awesome videogame montage (Pong, Tetris, Pac-Man, Space Invaders) during "Juicebox." My favorite track of the evening was the set-closer "Take It or Leave It," which was a not-so-subtle retort to whatever criticism they may get for reuniting to play a few festivals. They're still the Strokes, so I'll take it.