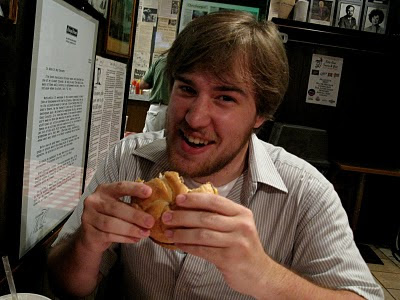 As I mentioned in my last post, this past weekend my good friend Danny Clay (that picture is probably his next album cover) made his way over to Chicago to visit my summer digs. We've got some pretty similar tastes in both music and food (maybe that's why we're friends?), so it was easy to spend a weekend catering to those commonalities at some of my favorite places around the city. Good times ensued. 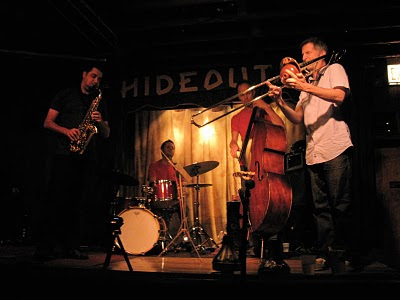 On Wednesday we started out the day with a trip to Michigan Avenue's original Billy Goat Tavern for a couple of double cheezborgers, then made the short jaunt over to Jazz Record Mart to survey their wares. For the evening's entertainment, we journeyed over to the Hideout for another edition of the ever-reliable Immediate Sound series. This particular night featured local free-jazz super-group The Engines, made up of trombonist Jeb Bishop (he played on Eureka), saxophonist Dave Rempis, Nate McBride on bass and Tim Daisy of drums. The group delivered two really solid sets of largely improvised music, showcasing a group dynamic that seemed at once spontaneous and oddly controlled. 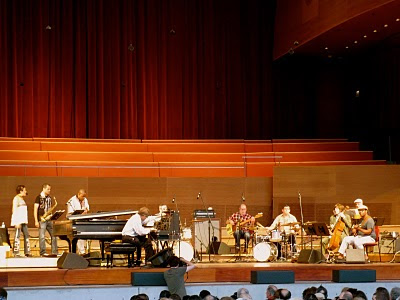 Thursday evening we made our way to Pritzker Pavilion for the kick-off of the Made in Chicago jazz concert series. An augmented line-up of local post-rockers Tortoise headlined the show, debuting an original composition commissioned for the occasion with the help of several Chicago improv-scene heavyweights. Tortoise acted as little more than a backing band, giving their guests plenty of room to create as they saw fit. Without a doubt, the night's highlights were Nicole Mitchell's piercing flute solo (that one drove away a good number of people) and Fred Lomberg-Holm's distorted cello refrain. As usual, the sound in Pritzker was beautiful, conveying the full range of the on-stage assemblage. The only thing that could have made the night better would have been a little vibraphone action from McEntire and Herndon. Maybe next time? 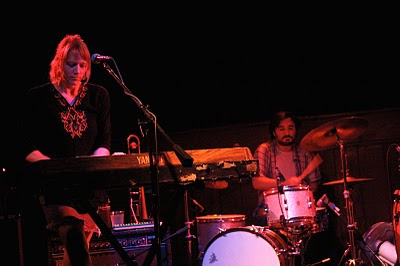 Friday began with an early morning trip to Hot Doug's, a necessity not only because Dan needed to experience some of the best hot dogs in Chicago, but also because Doug is closing up shop for the next few weeks for some well-deserved vacation time. I also made a point of taking Dan over to the Whistler to see one of Leroy Bach's solo acoustic sets, a weekly occurrence that never fails to entertain. Later in the evening, we found ourselves at Schubas for the Reds and Blue CD release show with Hollows. I was particularly impressed with Reds and Blue, which featured Time Out Chicago Music associate editor Areif Sless-Kitain on drums (do interns have to give full disclosure? Too late). Their keyboard-driven prog-rock was a nice change of pace after a couple of days of wall-to-wall jazz. 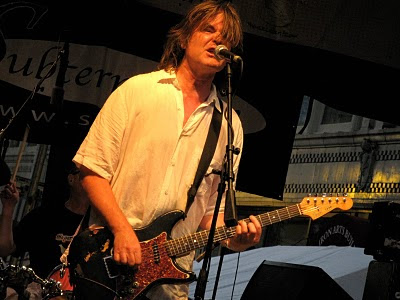 On Saturday we found our way over to Wicker Park fest, catching sets from Gaslamp Killer, Holy Fuck and Mission of Burma. The place was packed, I don't think I've been to a street fest this summer that has had the draw that this one did. I guess they're doing something right. Burma was definitely the night's high-point, finding the group in fine form and running through a nice mix of material, both old and new (while name-dropping the nearby Myopic Books). 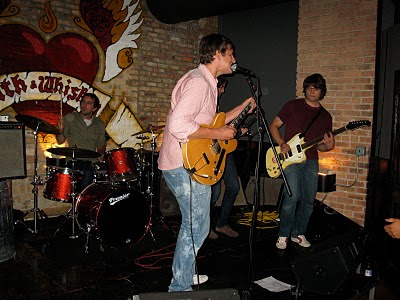 Yesterday we wrapped things up by catching Chicago Stone Lightning Band (featuring my TOC boss, John Dugan, on the drums) at the hokey biker/guitar bar Faith & Whiskey. The day's cuisine included stops at the Fullerton Diner (for brunch), Portillo's (for Itallian beef, naturally), Revolution Brewing (for the microbrews) and the Boiler Room (for some late night pizza, beer and Jameson).

What's next? This coming weekend is Lollapalooza, which I expect to be every bit as busy and tiring as Pitchfork was (perhaps even more so, Grant Park is so big...). Currently, I'm resting up and looking forward to catching sets from the Black Keys, the New Pornographers, the National, the Strokes and Deer Tick. If you're coming out to Chicago for the big fest, make sure you get in touch with me, it'd be nice to see some of you folks!
Posted by Zach L. at 5:10 PM