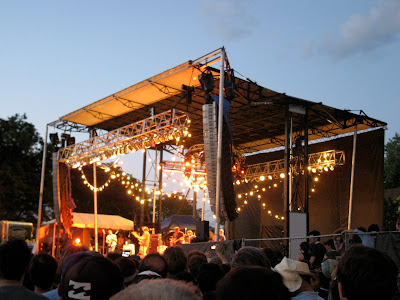 So, my Pitchfork Festival experience this year boiled down to music, heat and exhaustion. As I expected, it was a little bit different of an experience attending the festival as a member of the press. For one, I spent a good amount of time posting pictures and reviews in a stuffy press tent that somehow managed to be hotter than the sun-beat festival grounds. On the other hand, I also got to spend some time in an air-conditioned tent called the Heineken Green Room (it had green carpet... I doubt it was environmentally friendly) where I helped conduct live, streaming interviews with bands and artists for Time Out. I also found the time to write a few live reviews which got posted to the TOC blog. 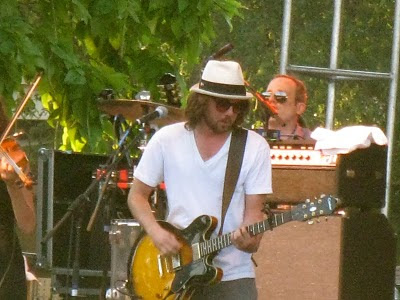 As for the music, I had the chance to see just about every band I wanted to check out at the festival. Broken Social Scene were the highlight of Friday, taking the stage with their usual entourage as well as recent producer John McEntire on percussion. Their set was heavy on material from Forgiveness Rock Record, but they also threw in some classics such as "Stars and Sons" and "Cause=Time." More than anything, it was really nice to see the group back together after years of solo endeavors and side projects. 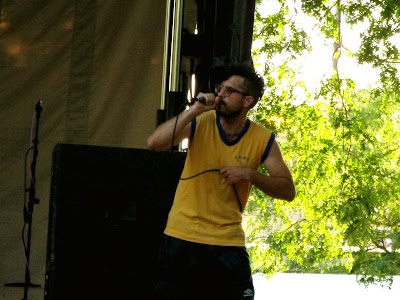 Saturday was the day I realized that this was the year that the festival had become something more than it had been in years past. It was hard to navigate the grounds, the whole thing was pretty obviously oversold. I certainly don't remember having nearly as much trouble getting around the year prior. Combine that with Pitchfork's unceremonious dropping of Chicago-based Goose Island as their beer sponsor in favor of Heineken as well as some assorted hearsay about general sponsor treatment and it becomes fairly obvious that the formerly small-time fest is getting a bit too big for its britches. I wouldn't be surprised if next year the fest graduates to a much larger venue than Union Park, or if it leaves Chicago altogether. But I digress... my favorite set on Saturday came care of Cincinnati's WHY?, who turned in a wonderful sounding set of their usual folk-tinged hip-hop. 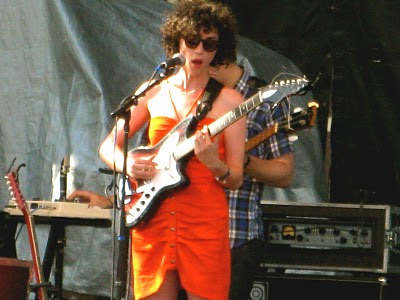 In all honesty, Sunday was the day I was truly looking forward too. It's actually the only day I bought a ticket for although my press pass negated the need for that (it went to a good home, at face value). St. Vincent was the afternoon's initial highlight, especially after my last attempt to see her ended in disappointment thanks to PA woes. The sound on the Connector Stage actually wasn't that great either (guitars were continually muffled on the stage all weekend long), but the PA's did seem to work and Annie Clark and her band played some wonderful renditions of my favorite tracks such as "The Strangers," "Laughing With a Mouthful of Blood" and "Actor Out of Work."

There was little question that the majority of the day was just one big lead-up to the night's main event: Pavement's first appearance in Chicago since reuniting. First though, the group brought out Drag City mainstay Rian Murphy to deliver an introduction that was so dry and witty that pretty much no one caught onto how funny it actually was. Instead, the guy got stuff thrown at him and then got booed off the stage. I'm sure it amused Stephen Malkmus to no end. As for the show itself, the song choices weren't too obscure, but they definitely covered all their bases (although I could have done with more from Wowee Zowee, but that's just me). "Shady Lane," "Spit on a Stranger," "Grounded" and "Conduit For Sale!" were the tracks that I enjoyed hearing most. The only thing that got me down was the way Malkmus essentially looked as if he was going through the motions, with every song punctuated by agitated looks and general impatience directed towards the rest of the band. As much as it pains me to admit this, it made the whole reunion look like little more than a cash grab. The tension that broke the group up is very much still present, but I'm sure the paychecks make it tolerable... at least until the tour wraps up. There's no way we'll see another album from these guys, so seize the chance to see them while you still can. The music is just as sloppy and liberating as ever, and even if it doesn't live up to seeing them in their heyday, I'm glad I got the chance to experience the next best thing. Hell, I'll probably pay to do it again.
Posted by Zach L. at 5:18 PM