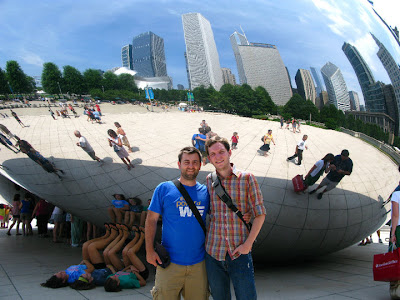 I've been stricken with guilt about not keeping this thing as up-to-date as previously planned, but it's been a busy couple of weeks here in Chicago. With the Pitchfork Music Festival quickly approaching, I figured it was time to do a massive update because I don't think I'll be sleeping much this coming weekend, let alone have the time to write a personal blog post. 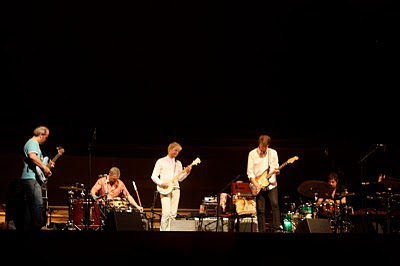 So where did we leave off? Ah yes, the On Fillmore show at Millennium Park. First off, it was woefully under-attended; you'd think 'the guys from Wilco' would entice a few more people to come out, especially in Chicago, but that didn't seem to be the case. I didn't recognize a single piece that the group played, and I have a hunch they just improvised everything. Cline was a pretty brilliant addition to the duo, mainly providing texture to compliment Kotche's and Gray's percussive tendencies. However, the real highlight of the night was when Cline and Kotche took the stage with Huntsville... pure, droning bliss for the select few of us that made it that far into the evening. You can read a bit more about the night and see some far better pictures over on the TOC blog. 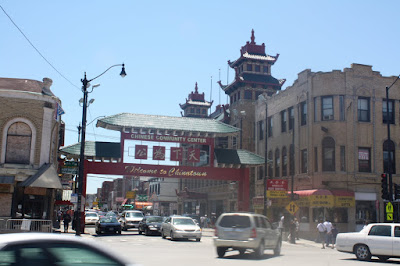 Later that week, my good friend Aaron came to visit and we bummed around town and hit a couple of places I've been meaning to go to since arriving in town. I finally made it out to Kuma's Corner, braved a half-hour wait for a table and another half-hour wait for our food, but ultimately got to sink my teeth into one of the best burgers I've ever had: the Pantera. The next day we made a trip over to Chinatown and ended up searching for Gundam model kits and having some so-so Cantonese fare. Later that night I got asked to go review a house/trance show at Soldier Field headlined by a guy called Deadmau5. Not my cup of tea, but I guess the lights were pretty and all that. You can peruse my tepid reactions and see some photos right here. 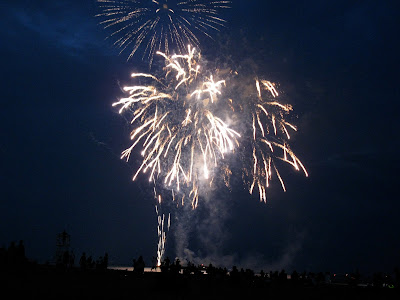 That same weekend I got to spend my first Fourth of July in Chicago, which involved trekking over to a beach and waiting around for about 15 minutes of pretty impressive fireworks. When I got back to my place in Logan Square, the neighborhood was lit up with all manner of colorful explosions for the better part of the evening. It was a good night to sit out on the porch and take in the sights, never knowing when your next sentence would be punctuated by a nearby blast.

The following Monday I had the chance to check out the Thermals at Millennium Park. Everytime I've seen them, it's been a fun show and this occasion was no exception. They busted out a ton of tracks from their soon-to-be-released new record, and touched upon just about every other song I wanted to hear. To see some very nice pictures, head over here. 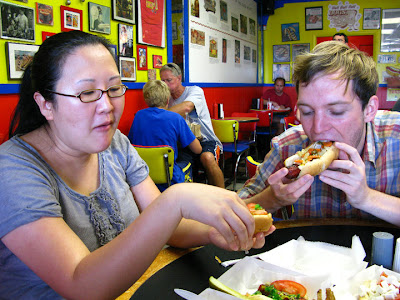 This past weekend, my cousin and his wife came to town and we managed to put together a pretty amazing three-day Chicago food tour. We hit the Roscoe Villiage Burger Festival, Great Seas Restaurant, Revolution Brewing, Smoque, Adobo Grill, the Boiler Room and, of course, Hot Doug's. Needless to say I was stuffed the entire weekend... in a good way.

The past week has been extremely busy over at Time Out; we've been putting together our preliminary coverage of the Pitchfork Music Festival as well as preparing for our live webcasts and live-blogging of the event. I can already tell it's going to be a totally different experience attending this festival as a member of the press, but it's a welcome challenge and I think it should end up being equally as fun. I'm looking forward to catching sets from Liars, Broken Social Scene, Modest Mouse, Kurt Vile, WHY?, St. Vincent and Pavement throughout the weekend. If you're at all interested in taking a peek at what I've been working on, you can find the majority of our coverage right here. Be sure to check in over the course of the weekend; I think we're going to have some pretty cool interviews with most of the artists in attendance.

And with that, I bid you adieu until my next post. Expect a bevy of photos from Pitchfork upon my return as well as many thoughts/reviews as I can muster. It'll be a real corker, I promise.
Posted by Zach L. at 10:10 PM