Nelsonville is a small town in the middle of southeastern Ohio overlooked by a gigantic white cross. It's the typical blend of drive-throughs, dollar stores and fast food; not the place you would immediately expect to find a top-notch music festival. But Nelsonville is also home to a little venue called Stuart's Opera House, run by a small group of some the nicest people around. Thanks to the efforts of these folks, I think it's safe to say that Nelsonville is now on the map, so to speak. The sixth annual Nelsonville Music Festival was the perfect blend of local flavor and national acts, all juxtaposed against the scenic vistas of rural Appalachia.

So before I jump into my recap, full disclosure: I've been helping out the folks at Stuart's for a few months now, and I was a weekend-long volunteer at the fest. While I may not have the most objective or complete view of the weekend's proceedings, I felt very compelled to at least try to encapsulate my experience. 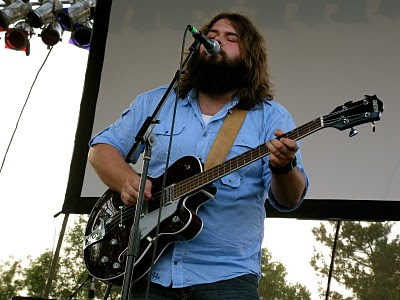 I was up early on Friday morning to make my way over to the grounds and see what I could help out with. Long story short, it wasn't until late afternoon that I was able to sit down and catch the majority of the Buffalo Killer's set. The bearded trio from Cincinnati delivered a set of blistering, blues-y, psychedelic rock that would have made the James Gang proud. Their new single "Huma Bird" was the highlight for me, a track replete with all the vocal harmonies and guitar fills that this group excels at. 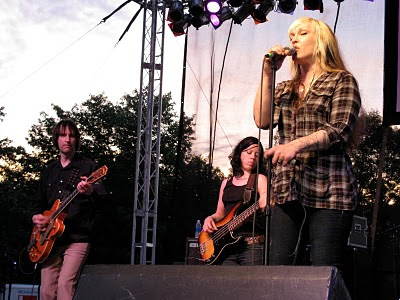 Next up on the schedule was a set from the Detroit Cobras, the most intimidating group of girls not found in a high school cafeteria. Backed by a beautiful sunset, the group burned through their set of scuzzy garage rock ditties. I ended up standing by some of the guys from the Honeybears, who seemed to be getting their minds blown. These girls knew how to work a crowd and they did a great job of getting everyone roweled up and ready for the festival's most rockin' evening. 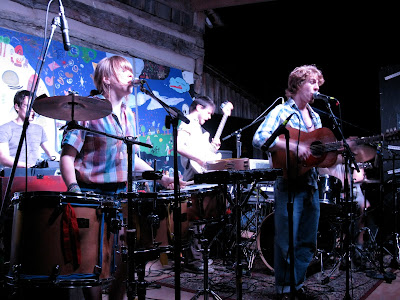 I only had about 15 minutes to check out the Givers, but upon hearing these guys I wish I had more. The five piece from Lafayette were crammed onto the Back Porch stage along with their large assortment of gear. The songs that I heard were upbeat numbers that were heavy on bass and guitar noodling. It's the kind of afro-pop inspired sound that seems to be the flavor of the month, but these kids do it right. Mark my words, you'll be hearing about this band from all your hippest friends very soon. 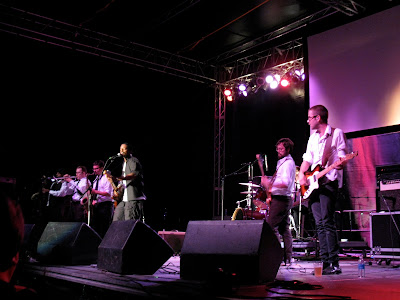 I'll admit that I had high hopes for Black Joe Lewis and the Honeybears. I really dug the record, and I'd heard great things about their live show. Unfortunately, I just didn't find myself as impressed as I thought I would be. Don't get me wrong, the Honeybears are an extremely solid band, and Joe Lewis plays his role as frontman to a T. It just didn't captivate me the way I hoped it would, and by the end of the night the shtick of it all was wearing a bit thin. 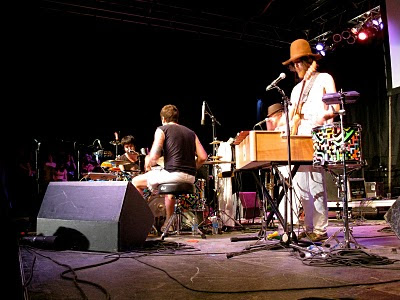 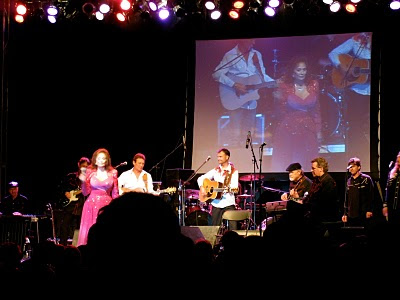 Saturday was another busy day for me; I worked in the green room most of the morning, making sure riders for the evening's acts were filled. In the afternoon, I did a couple of shifts at the merch tent. When I showed up, they were setting up all the Loretta Lynn merchandise, and that was predominantly what I sold throughout my stay. Loretta fans are a hardcore bunch; they don't just buy a single t-shirt, they get one of each color, an autographed cookbook, and a couple CDs for the car ride home. Most of the people I sold to were obviously there to see Loretta and tolerate the rest of the noise. Which is totally cool; if bringing in a big act like Loretta Lynn means that I get to see folks like the Detroit Cobras and Man Man, I'm all for it. Speaking of Loretta, it turns out that when you book her to play a gig, you don't just get her, you get her whole family. She's got a son who is your typical male country singer, cracking jokes about Viagra in-between songs. She's also got a pair of daughters who do a few solo numbers and then act as her back-up singers. By the time Loretta ambled out on stage in her big pink dress, the crowd was beyond ready. And what do you know? For a 75-year-old woman, she's still got a pretty damn good voice. Unfortunately she didn't really play anything from the record I'm most familiar with, 2004's Jack White-produced Van Lear Rose, but from the sound of it, she played what the crowd wanted to hear. 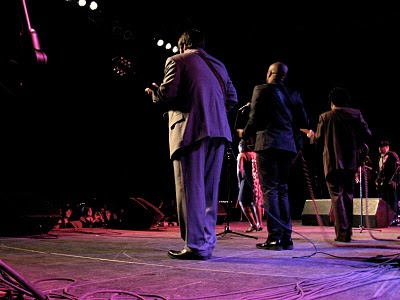 The festival grounds cleared out considerably once Loretta left the stage, which is unfortunate because all those people missed out on seeing the undeniable highlight of my weekend. The Dap-Kings warmed up the stage, quickly establishing themselves as one of the tightest bands I've ever laid ears upon. After a short introduction from the bandleader, Sharon Jones took the stage, and the rest can only be described as pure magic. Jones commanded the attention of everyone in attendance, perching precariously on a set of high heels that quickly came off so that she could dance all the more vigorously. Her voice sounded like it was echoing across the decades, seemingly ripped straight from some '70s soul record. At one point she brought some teenage kid on stage (I sound so old saying that...) and sang to him about how to love a woman. It was hilarious. I had to skip out a little before the encore to attend to some other duties, but I did catch two of my favorite songs: "I Learned the Hard Way" and "Better Things to Do". Sharon Jone, I got my taste and rest assured, I'll be back for more. 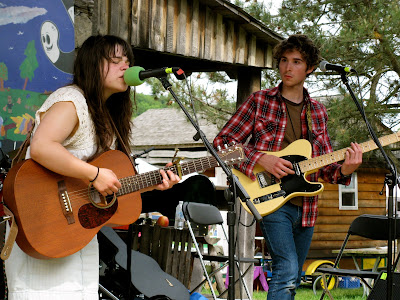 Sunday was an amazingly laid back day filled with lots of folks still groggy from the prior two evenings. Once again, my services were required at the green room for the majority of the day, but I did get a quick chance to check out Samantha Crain. I was a big proponent of her record with the Midnight Shivers, Songs in the Night, so it was nice to finally get to see her in person. Turns out her voice is just as great live as it is on tape, not to mention her lyrical wit and sense of humor. She played all three days of the fest, so it was all the more impressive that she was still in great spirits for her final set of the weekend. 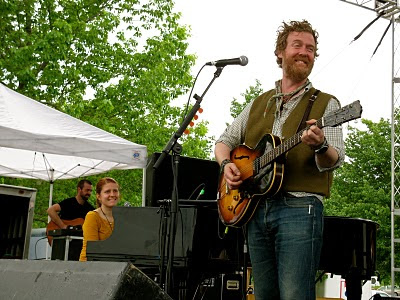 I think most everyone in attendance on Sunday was there for the Swell Season, but I have to wonder if they were expecting the kind of show they got. The set started out with a trio of Swell Season tracks, but the focus quickly switched to Frames frontman Glen Hansard, who serenaded the crowd with several solo acoustic numbers. Swell Season counterpart Markéta Irglová was shuttled on and off the stage as needed, and the group's violinist did an Andrew Bird-esque looped violin piece at one point. I couldn't help but notice the on-stage dynamic between Glen and Markéta; the two barely interacted, suggesting a tension that is definitely prominent in much of the lyrical content of the group's latest, Strict Joy. Estranged lovers aside, Swell Season delivered in spades, if not exactly in the way I expected. It will be interesting to see how much longer this group lasts, but one thing is for sure: they certainly make beautiful music together.

As the group played their final notes, it became apparent that the Nelsonville Music Festival had drawn to a close. I don't think anyone can deny how smoothly the whole thing ran, and frankly it's still a little bit unbelievable to me. It was an honor to be a part of something so special, and I look forward to playing a bigger role next year. Nelsonville played host to some really great music and people seemed to have a really good time. In the end, what more can you ask from a music festival?
Posted by Zach L. at 9:32 AM