Yeesh, sorry about the wait. Comic day was a day late last week, and on top of that it was a big day for comics, seeing the conclusion of Marvel's Secret Invasion and a few of the mini-series that went along with it. I've finally made my through everything so here's the week in review: 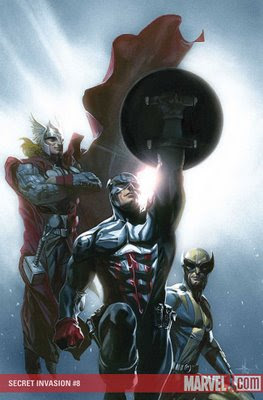 Secret Invasion #8
This is the moment we've all been waiting for, the end of the Secret Invasion story arch and the beginning of a new chapter for the Marvel Universe. Bendis makes a smart move by shying away from the action-packed tone of issue #7 and instead focusing upon the aftermath of our heroes climactic battle with the Skrull forces. However, there are some very questionable choices made in how the ending of this story pans out. First of all, the characters who were replaced by Skrulls are all back in action, which seems to me like a way of making the inevitable relaunch of Spider Woman that much more interesting. Next, Tony Stark takes an unfair amount of the blame for the invasion, which is especially apparent in how he is treated by Thor. Lastly, we have Norman Osborn becoming director of S.H.I.E.L.D., solely because he was the one who killed the Skrull Queen. Given that these are all highly unlikely occurrences, Bendis does his best to make them all as plausible as possibly. The art was likely the reason for the two week delay of this issue, as it stands shoulder to shoulder with what has previously been seen during this series. All in all, this is a pretty satisfactory, if highly unlikely, end to the Secret Invasion arch. It certainly brings about some big changes to the Marvel U, and it'll be interesting to see how writers will handle this. It's a little bit disappointing that all this seems to accomplish is to set up ANOTHER big, world-changing event, but I suppose that's really what keeps me reading. Congrats Marvel, you've got me hooked. 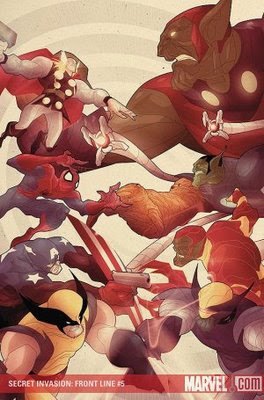 Secret Invasion: Front Line #5
First of all, I really like this cover, and the covers of this series in general. They've all been really unconventional, much like the series itself. At the end of last issue, our non-superhuman heroes stumbled upon the climactic final battle between the Skrull invaders and the heroes of the Marvel Universe. This issue begins by showing us a little more of that, including the part where Norman Osborn makes his fateful killing. The rest of the issue follows reporter Ben Urich as he comes to terms with life after the invasion. I like that he is a character who sees just how wrong the transfer of power to Osborn really is. It's great that Marvel found a way to present this side of the story, and I even liked how they tied this into their next story arch by letting Urich coin the phrase "Dark Reign". The writing on this series hasn't been particularly stellar, but this issue really shines in that department, likely because it is mainly narration. Likewise, the artwork does its job, with the exception of the very odd take on Osborn towards the end. I know Marvel has tried this whole 'citizen's point of view' idea before, but I think it worked out very well in this situation, as the invasion really did have a pretty big impact on people other than superheroes. I liked it, and if you didn't read it, it's worth tracking down the cheap back-issues to do so. 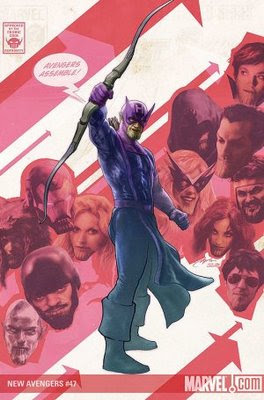 The New Avengers #47
I'll admit it; I'm a little bit of a New Avengers fanboy. It's been my way of keeping up with the Marvel U without reading too much else for quite a while and I've grown attached to the crew of artists that work on it. Since Secret Invasion started, New Avengers has become the home of side-stories and flashbacks that fleshed out events only mentioned in the main storyline and gave clues about future occurrences. This issue is the last of these side stories and recounts the introduction of Luke Cage to his future wife Jessica Jones. Secret Invasion followers will know that the couple's baby was stolen by the Skrull impersonating Avengers butler Jarvis. It only serves to make this moment, which is recounted at the end of the issue, that much more meaningful. I'm looking forward to what is going to be done with the New Avengers series post-Invasion. Obviously there are going to be line-up changes, with Iron Man almost assuredly leaving the team. The New Avengers will also likely be going underground, as Osborn will probably not want to continue to sponsor them. But I'm getting ahead of myself. Not that exciting of an issue, so don't feel bad for skipping it unless you're a really big Luke Cage fan. 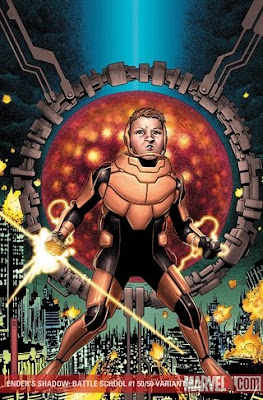 Ender's Shadow: Battle School #1
I've been digging the Ender's Game mini-series so far, but after reading this issue I think Ender's Shadow may have a slight edge. For one, I'm a way bigger fan of this art; which as readers of my reviews know, has been my main complaint about the Ender's Game books. Sebastian Fiumara's drawings are sketchy and stylized but also extremely detailed and bold when they need to be. Giulia Brusco's coloring is the perfect fit, and sells the futuristic Rotterdam as being a grimy, horrible place. The last page offers a glimpse of what this team's artistic direction will look like once the story makes the jump to space, and for me, it worked so much better than what we've seen in the Ender's Game issues. I think my predictions about this series were right; it's going to be a companion piece that fleshes out the characters that we're not going to meet as a result of the streamlining of the main story. Mike Carey does a very competent job in the writing department, although honestly it has been awhile since I read Ender's Shadow, and I barely remember any of the smaller details. The character of Bean presented here meshes with everything I remember about him though; he's a smart little boy who will prove to be a valuable ally to Ender once the two are introduced. I'm really looking forward to the rest of this series, especially the art, and I might even read through my old copies of Ender's Game and Ender's Shadow again just so I have little better idea of what's going on. 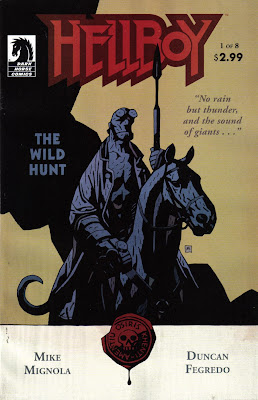 Hellboy: The Wild Hunt #1
So begins the newest Hellboy story arch, the longest to date, clocking in at a hefty eight issues. Opening the issue, I realized just how much I've missed the art of Duncan Fegredo. This guy takes everything Mike Mignola's art brought to the series and pushes it a step further, fleshing things out so that every panel on every page looks like one of the detailed covers that Mignola still draws for most of his creations. The story picks up directly after Hellboy's last adventure in Darkness Calls, and the narrative contains numerous allusions to other past adventures, leading me to believe that this big arch may attempt to tie up some loose ends and may (dare I say it?) even lead to Hellboy's reunion with the BPRD. I won't ruin much of the plot for you, although there isn't too much to ruin. The basic gist of things is that Hellboy is invited as a guest on a hunt for giants who have appeared somewhere in England. However, not everyone on the hunt seems to be fan of having a demonic presence in the party. This looks like it's going to be an exciting series; it's great to have a solid Hellboy issue to look forward to every month again.