These reviews are a little bit late this week, thanks to me moving back home for the beginning of my winter break. But, I certainly didn't forget about them! Here's this week in review: 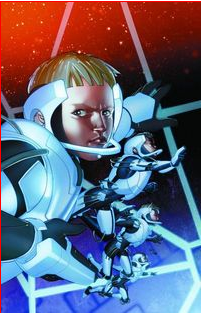 Ender's Game: Battle School #2
With the exposition taken care of in issue #1, this is where the real meat of the story begins. I really liked the choice of writer and artist on this series, and was extremely satisfied with the results in the first issue. However, I think things take a little bit of a turn for the worse in this installment. My first major complaint is the character design. I'm having some real trouble telling Ender apart from all the other children. Pasqual Ferry's cartoon-ish character designs blend together a great deal, so I always had to do a double take to figure out who was in the panel. Another problem in this issue is the condensing of the story. Those who have never read the novel are going to be a little lost by the end of this issue. Christopher Yost spends a great deal of time detailing Ender's shuttle ride to battle school; time that should have been spent on Ender's arrival and the introduction of some of his classmates. As it stands, the reader is pretty much just thrown into the thick of things, with very little idea of who's who. The issue redeems itself at the end, with Ender's first trip into the Battle Room which pretty much hits the nail on the head visually. I realize that it's hard to pack every detail of a fairly lengthy novel into a 5-issue mini-series, but I hope the next few issues pick up the slack a little bit. It shoud be noted that December will see the release of the Ender's Shadow mini-series, which focuses on the character of Bean and his experiences in Battle School. Perhaps this will act as a companion piece that fleshes out the supporting characters more thoroughly. I've got high hopes for this one, despite my slight dissapointment with this issue. 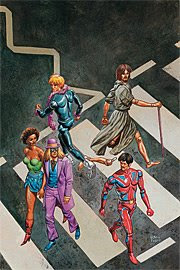 Greatest Hits #3
Vertigo definitely has something very unique with this series that follows a Beatles-esque team of superheros. This issue marks the halfway point of the series, as tensions between the Mates begin to rise, and their future as a team seems unclear. In a last ditch attempt to keep the fab four together, Crusader (the Paul McCartney equivalent) arranges for the team to be sent to space to face an alien threat. Meanwhile, in the future, the group making a documentary about the Mates stumble across some suspicious footage that suggests that the four heroes might not have been entirely truthful about their adventures in space. While I admire the unique presentation of this story, juxtaposing events from the past and present in a sort of comic-doc style, it certainly requires the reader to pay ALOT of attention to who's speaking and where they are in time. That being said, this is a title I've been looking forward to for the past few months simply because the story is so well written and engaging. It'll be interesting to see how things develop as the Mates head into space; it sounds like there are some pretty crazy issues ahead.