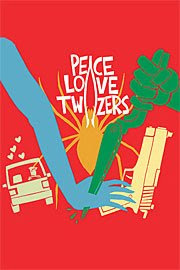 Young Liars #9
Young Liars is without a doubt my current favorite original, on-going comic series of the moment. Ever since picking it up on a whim, I've been hooked on David Lapham's twisted world of sex, drugs and rock & roll. The series hasn't slowed down at all, and even after this most recent issue I'm still not quite sure about what's going on. At a point where most other authors might be trying to tie up some loose ends, Lapham is just creating more. He does provide a little explanation about issues 6 and 7, confirming that they were in fact hallucinations of Sadie's that Danny was apparently participating in and influencing subconsciously. This issue finds Sadie back on her feet, and Danny still intent on getting her back to normal, which means confronting her demons head on in the hope of somehow jogging her memory of her old self. This goal just serves to introduce more people who are after Sadie for one reason or another, suggesting that she is more important than Danny might have previously thought. Not mush in the way of action in this issue, but plenty of new revelations. As usual, Lapham's art is great, providing a good amount of detail and fleshing out his very seedy and dirty world. I look forward to this title every month, it's a confusing but gripping tale, and one the most original on-going comics available. 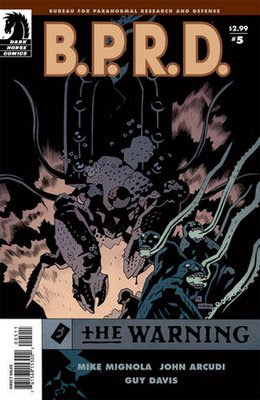 B.P.R.D.: The Warning #5
This series of B.P.R.D. has answered some big questions, but posed just as many new ones, while providing some of the most epic events in the title's history. This issue finds the B.P.R.D. victorious over the giant bio-mechanical walkers they somehow unleashed way back in issue #2. However, in the process, they've destroyed an entire German city, and if Abe Sapien's premonitions are to believed, this won't be the end of these catastrophic events. Liz Sherman is still missing, and the B.P.R.D. is sorely missing their most valuable member: Hellboy, who is M.IA. as usual. I think it's only a matter of time until Red comes back to the B.P.R.D. for a few issues, as this crisis is definitely taking on epic proportions that certainly seem as if they may require the presence of the Right Hand of Doom. As usual, Guy Davis's art is the perfect blend of functionality and detail, almost a fleshing out of some the best aspects of Mignola's art. I'm really liking the decidedly epic turn this story arch is taking, and I'm definitely looking forward to its continuation in The Black Goddess. 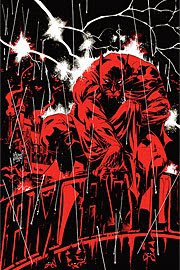 Batman: Cacophony #1
Kevin Smith has made quite a few enemies with his sporadic turns as a comic writer. Some fans have had a problem with him bringing his sex-driven comedy into the stories of their favorite characters. Others just don't think he cuts it as a comic writer, arguing that his abilities as a screenwriter just don't translate into the realm of comics. I, for one, really enjoyed his work on the relaunch of Green Arrow that he did for DC back in 2000, and this is what led me to give Batman: Cacophony a chance. Ultimately, Smith's writing doesn't lend itself as readily to the world of Batman as it did to the Green Arrow. The exposition is pretty weak, and his reintroduction of his Onomatopoeia character seems extremely forced. Onomatopoeia was kind of a one-note gag to begin with, kind of cool, but probably should have just stayed in the pages of Green Arrow. That being said, I do really like Smith's writing for the Joker; he definitely goes by the Nolan rule of giving the character jokes only he could find funny. Batman doesn't make too many appearances, which is odd, but Smith is obviously comfortable within the universe of Bat-villians. Walt Flanagan's art does a good job of setting a gritty cartoon-ish mood, specifically with his portrayal of the Joker. He's a really talented artist, especially for a guy who hasn't published too many books. Hopefully this project will get him a few more jobs, I certainly wouldn't mind seeing more of his work. Overall, this first issue isn't as strong as it could have been in the writing department. Hopefully things improve over the next two issues, or all those Kevin Smith-haters may have a little more ammo.
Posted by Zach L. at 8:58 PM