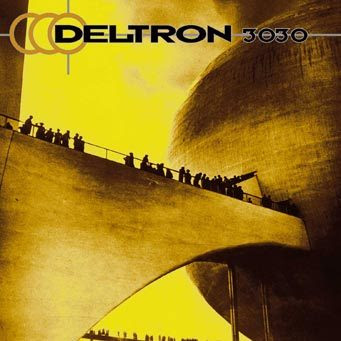 I really got into this album over the summer, as anyone who rode in my car with me can likely attest to. Deltron 3030 (the group) is Del tha Funkee Homosapien (you know him as the rapper from "Clint Eastwood" and "Rock the House" by Gorillaz), Dan the Automator (the producer of the first Gorillaz album) and DJ Kid Koala (I wasn't familiar with him, apparently he does all the turntable work). I see Deltron 3030 as being the precursor to the first Gorillaz album; without this record I'm not sure Gorillaz would be around today. Damon Albarn met Del and Dan when he agreed to lay down some vocals for this record. The rest is history.

Deltron 3030 is a sci-fi themed rap concept album, that loosely tells the story of Deltron Zero, a rapper/futuristic warrior who travels across the galaxy fighting evil mega-corporations and entering rap battles. The plot is flimsy, but the songs are anything but. From the opening swells of "3030" it's blatantly apparent that this is a record of epic proportions. Dan the Automator and Kid Koala cobble together simplistic yet grandiose beats that don't get in the way of the main attraction; Del's vocals. I've always loved the sound of Del's voice, he's doesn't sound like any other rapper I've ever heard. He has his own unique rhythm and tonal quality that just makes him extremely interesting and enjoyable to listen to. He's at the top of his game lyrics-wise on this record, taking the sci-fi theme and really running with it. It's an album that deserves to be listened straight through, in order to fully experience everything it has to offer. That being said, here are few of my favorite tracks for your perusal: