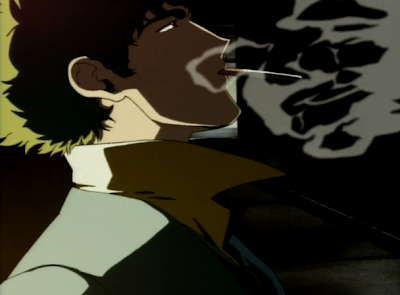 I've recently been re-watching the entire run of the seminal anime series Cowboy Bebop. Aside from the excellent animation, gripping stories, and genuinely likable characters, one of the highlights of the series is the amazing soundtrack. Composed by acclaimed Japanese musician Yoko Kanno, the music of Cowboy Bebop encompasses a variety of genres from big band to jazz to wailing rock balladry. The soundtrack is performed by a collective of musicians known as the Seatbelts (named after what they must wear to protect themselves during strenuous jam sessions), accompanied by a wide range of vocalists and other guest performers. The body of work that the group produced for the show and its subsequent movie adaptation spans 4 full albums and 3 EPs, a tremendous amount of music by any measure. Almost none of the tracks are heard in their entirety in the show, with a good number of songs heard exclusively on the albums. Series creator Shinichiro Watanabe commissioned Kanno to record much of the music before the show even went into production, as he liked his animation to match up exactly with the music, allowing for a seamless connection between audio and visuals. The quality of this work is what sets it apart from the generic symphonic or electronic soundtracks of many other animated series. Kanno's influences are distinctly western, particularly her love of big band, blues, and jazz, but this fits in well with a show that is equally heavily influenced by film noir and the American western. Music often conforms with the theme of a particular episode (with episode names like Jupiter Jazz, Asteroid Blues, and Heavy Metal Queen, it's not hard to know what to expect). It's easy to get hooked to the records, because the genres are always changing, just like some kind of great eclectic mix-tape. None of the soundtrack albums received official US releases, but any savvy Bit Torrent-er can find the full set without much trouble. Here are a few of my favorite tracks to get you started: