As of today, I've officially been transplanted to Ohio University, and so far things aren't too bad here. It's all about easing into the lifestyle, and in many ways it still feels like I'm just beginning some week long vacation that's going to be over before I know it. In reality, I'm here for the long haul and as soon as classes start this Tuesday, I'm sure alot of things will kind of normalize and it'll become easier to drop into the groove of campus life. But enough about the present, this post is about what's in store... 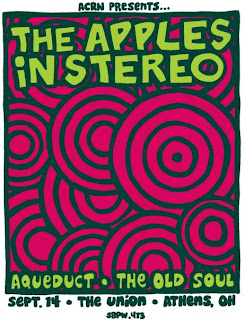 In just two weeks, I'll be attending my first concert here in Athens; The Apples in Stereo live at the Union. Nice to see that a band of this stature takes the time to play a mid-sized college town like Athens. I just got a copy of the band's latest; New Magnetic Wonder, and it'll be interesting to see how much of it is pulled off in a live setting. Robert Schneider's voice is naturally pretty abrasive, so combined with some of the more complex electronic arrangements, their live sound is likely to be pretty loose and raw. But I'm not barring the chances of them blowing my mind and playing some near-studio quality renditions. Next up on the calendar (as I've previously mentioned) is the double billing of The Arcade Fire and LCD Soundsystem at Promowest. I'm really looking forward to this one, both bands have pretty reputable live shows so the combination of the two should deliver. It's also notable that this will likely be one of Arcade Fire's last US shows in support of Neon Bible. Does anyone else feel like that record just came out yesterday? I guess it's nice to see a band moving forward so quickly and attaining the accolade they deserve at the same time. Also in October, I'll be trying to make it out to the Shout Out Loud's show at the Basement. I've been a pretty big proponent of this Swedish group since hearing their debut album Howl Howl Gaff Gaff back in 2005. The tracks I've been hearing from their upcoming release Our Ill Wills sound like the perfect evolution for the band, maintaining their pop sound but pushing forward with some really great and mature sounding arrangement. It'll just be a blast to see how it's all pulled off in the live setting, and given that the Basement is one of the most intimate venues in Columbus, I might just learn a thing or two as well.

Beyond the aforementioned shows, everything else is a little nebulous right now. I'm definitely missing some great stuff due to college. For example; I won't be making it back for Wilco's October 16th show at Mershon Auditorium. I'm not too crushed, seeing as I got to see them this summer in Cincinnati, but I've been going to every Wilco related show in Columbus for about 2 years now, so not being able to make it to one is a bit of a let-down. Luckily, I think my family is going to pick up the slack and attend in my stead, so I'll likely still be able to share some photos and impressions. Ah well, just one of the sacrifices that has to be made for the sake of higher education...
Posted by Zach L. at 9:03 PM