Hardcore Modest Mouse fans are a curious bunch. When they're not jostling for a position as close as possible to Issac Brock, or extolling their newfound love of Johnny Marr (overheard: "Wasn't he in a band before this?"), they're yelling approximations of alternate lyrics and marveling at their own ability to memorize the bible worth of rapid-fire prose and wit that Brock has blessed the world with. Sure, it's typical fanboy behavior, but in this particular case it just seemed a bit humorous to me (they're all welcome to come laugh at me at the next Wilco show). 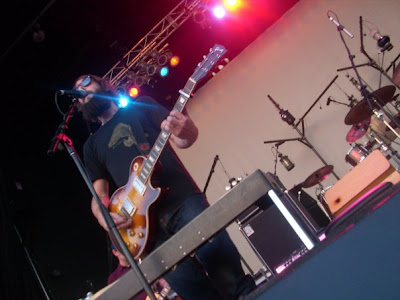 Wednesday night found me surrounded by a bunch of these types, for a marathon three band show in the sweltering Ohio heatwave. Love as Laughter kicked the evening off with a few of their very Pavement-esque tunes, clearly just flattered to be playing to a surprisingly large crowd. Next up was Band of Horses, who delivered a really great performance, playing it safe for the most part by sticking to familiar material, but also providing a great preview of songs from their upcoming sophomore LP Cease to Begin. Renditions of "The First Song", "Wicked Gil", "Weed Party", "The Great Salt Lake", and "Funeral" were all spot on, sounding as lush as their studio counterparts thanks to a three guitar attack. The new songs were hit and miss, but it's clear that the band is trying new things. The addition of a keyboardist made a few of the newer tunes sound like the band was channeling Lynyrd Skynyrd, especially the band's closing number which was easily the best sounding song any of the bands played all night. 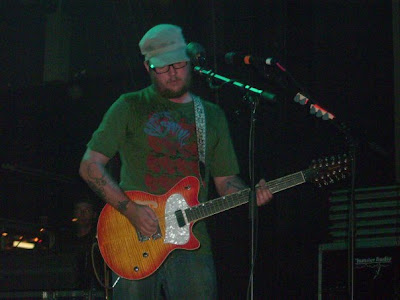 When Issac Brock and company took the stage, the place quite literally went crazy. The band breezed through their newer material, including singles "Dashboard" and "Float On", within the first half hour or so. This made way for the barrage of fan favorites that followed, including "The View", "Trailer Trash", "Black Cadillacs", "Bukowski" (replete with banjo) and an obscenely long version of "Tiny Cities Made of Ashes". The integration of Johnny Marr into the pre-We Were Dead Before... songs was pretty seamless, adding his own little flourishes to a few songs, but still playing the requisite riffs and fills the songs called for. Frustration was evident among most of the band, as a constant stream of crowd surfers took it upon themselves to dance on stage in front of the group (That's what you get for not putting up a security fence, a measure which the band must have requested not to implement. Don't know what they were expecting...). The main set ended with "Spitting Venom", an already long song from their most recent release that was stretched out well past the 10-minute mark. Overall, a pretty good time, if a bit indulgent, I don't go to a Modest Mouse show to see them jam for 15 minutes. Might just be another way of sating those crazy fans...