Live Review: TV on the Radio 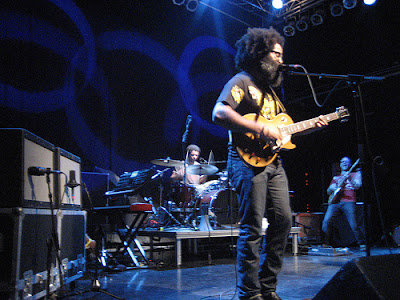 Sometimes you have to take what you can get, and Wednesday night's TV on the Radio show was a prime example of that. Post-rap group Subtle warmed up the crowd, but were more annoying than entertaining due to the antics of their lead singer/rapper who had a penchant for distracting theatrics and extremely forced stand-up comedy. There's a fine line between clever and stupid, but pantomimed throat slitting with a switchblade, throwing plastic forks into the crowd, and attempted self-mutilation with said plastic utensils strays exclusively to the 'stupid' end of that spectrum. The sad part of it is, the instrumentation was far superior to the contrived stage antics and probably would have been invariably more entertaining if not for all the shtick surrounding it.

TV on the Radio fared far better, hitting the stage and immediately breaking into a rendition of the anthemic "I Was a Lover" in front of a sold out house. The night was split pretty evenly between songs from their most recent record, Return to Cookie Mountain, and their 2004 release Desperate Youth, Blood Thirsty Babes. Lead singer Tunde Adebimpe and guitarist/producer David Andrew Sitek positively exuded energy for the first 20 minutes or so, but right after the high energy romp of "Wolf Like Me" things seemed to die down. It might just have been my unfamiliarity with their earlier material, but I doubt I was the only one who found much of the middle of their set to drag. The end of the main set was redeemed by "Dirtywhirl" and a human-beatboxed version of "Province". The set seemed short, clocking in at a little under an hour, so an encore was almost a given.

The band came back to the stage with all the members of Subtle, launching into an impromptu percussion jam that eventually bled into "A Method". The band quickly ended the night with "Staring at the Sun", arguably the song that sparked much of the interest in TVOTR three years ago. While much of their performance was very enjoyable, the experience as a whole wasn't quite as fulfilling as it should have been. The band was obviously suffering from a little mid-tour fatigue, playing a short set and not keeping the energy constant throughout the show. While this is understandable, it's a bit of a disappointment to a person expecting to see what has been hailed as an incredible live show. It wasn't all a bust though, there were some enjoyable moments and it was great fun to see some of the more experimental elements being put to the test onstage. Hopefully Columbus doesn't get stuck with another mid-tour date the next time TVOTR comes through town...
Posted by Zach L. at 11:15 AM

Email ThisBlogThis!Share to TwitterShare to FacebookShare to Pinterest
Labels: live review, subtle, tv on the radio