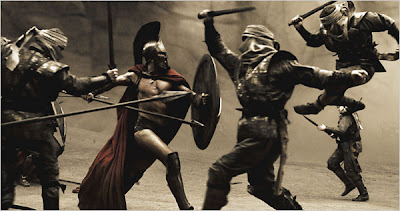 Wow. Not since Robert Rodriguez's Sin City has a graphic novel been so faithfully and stylishly been brought to the big screen. Zack Snyder (of Dawn of the Dead remake fame) treats Frank Miller's work as a storyboard, fleshing out the spaces between frames with beautiful cinematography that stays consistent with Miller's grand vision of one of history's most epic battles. A good amount of the movie is a plethora of exquisitely executed slow-motion battle sequences, replete with severed limbs and gratuitous amounts of blood, set to a wailing guitar-driven soundtrack. Yup, it's a movie squarely aimed at the young male demographic, as is clearly evidenced by an unnecessarily long sequence involving the gyrations of a scantly clad oracle preparing to deliver her prophesy. All bases are covered, be it boobs, blood, or battle. But the profundity of the underlying story is not lost among this sea of optical flair. The film keeps a great rhythm, managing to cut between the political turmoil in the city of Sparta and the on-going battle, while loosing very little of its flow. This all bodes well for Snyder's next project; a film adaptation of Alan Moore's seminal Watchmen graphic novel. It will be a harder story to tell on the big screen, but 300 proves he is the man to do it. Do yourself a favor, go to the theater and enjoy this film. It stands among my favorites of the year so far.
Posted by Zach L. at 12:11 PM