Let's Get Carried Away 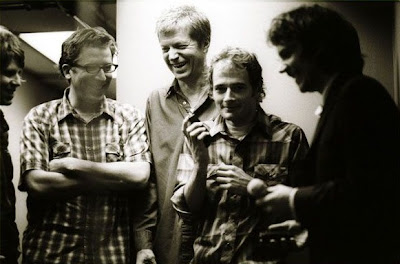 Usually I shy away from regurgitating news, but in my mind, this seems too good not to repost. This morning saw the release of the tracklisting for Wilco's forthcoming Sky Blue Sky LP. Click the link if you're not in the know, I won't bother copying it here. So here are my thoughts on the tracklisting, based only on some limited bootleg listening (I don't think I've heard all the tracks available, I'm actually trying to give myself something to look forward to on May 15). First of all, I'm very happy, and not the least bit surprised, to see that both "Impossible Germany" and "Walken" managed to make the cut. These are the two tracks that really sold me on how great Wilco's new line-up can sound, and gave me faith that Jeff Tweedy is still capable of writing great songs. I'm also down with the inclusion of "Side With the Seeds" and "Shake it Off", both of which were revealed at Wilco's last two shows in Chicago this past Thanksgiving. "Side With the Seeds" is the kind of pensive ballad that every Wilco album needs, while "Shake it Off" is the kind of rhythmically challenging showpiece that I expect from such a talented group. I'm on the fence about "What Light" as well as "On and On and On", especially as the album closer. "What Light" always struck me as a pretty generic pop song, not exactly what I expect from the guy who penned the tongue-in-cheek anti-pop of "Can't Stand It". As for "On and On and On", my problem with the song is pretty much addressed by its title. It keeps going, and it doesn't really get anywhere, no climactic Nels solo, no pounding Glenn breakdown, just a plodding piano driven ballad. Not the kind of thing I want to end a Wilco album with. I'll hold final judgment until I hear the final studio versions, as Wilco has a habit of drastically changing tracks during the recording process. And now on to the tracks that AREN'T here. Tweedy revealed in January that "Is That the Thanks I Get?" wasn't album-bound, so no surprises there, but what's with the axing of rocker "Let's Not Get Carried Away"? A ghost is born had "I'm a Wheel", I really expect my Wilco albums to have at least one raucous party tune (which perhaps will be fulfilled by one of the songs I haven't heard yet). My compliments to the band on seeing that "Let's Fight" wasn't really working out. The live versions were an exercise in shoddy string pads and strained falsetto. I've been hearing good things about "Sky Blue Sky" and "Please Be Patient With Me", both of which have been played heavily of Tweedy's recent solo acoustic tour, but so far I've resisted the temptation to download. So, with a few mystery tracks to spare, that about wraps up my thoughts on the tracklisting. And so begins the arduous wait until May 15...

On a lighter note, I've added a few new concerts to my list for the year. On April 13, violinist Andrew Bird and his band will be coming to the historic Southern Theater. I know his show at the Wexner Center a few years back sold out pretty quick, so my attendance is mainly based on if I can get tickets or not. I've also learned, though not confirmed, that Chicago post-rockers Tortoise will be stopping by the Wexner Center on June 14. Being able to see Jeff Parker twice in one year is simply an opportunity I cannot pass up, so if this comes to fruition I'll most definitely be there. On an unrelated note, I've heard that the Arcade Fire will be performing on SNL at the end of this month. How long is it until we see Wilco on the show? I'm sure the band could provide comedy on par with what is usually seen on the show these days. More postings as motivation permits...
Posted by Zach L. at 12:10 PM