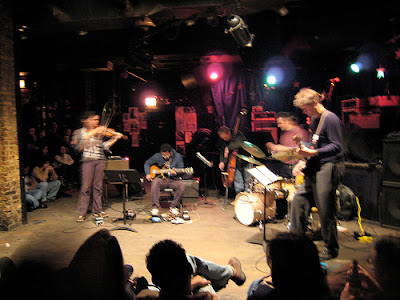 Last weekend I had the distinct pleasure of seeing the Scott Amendola Band in the Wexner Center's performance space. The lineup featured all of the players from the band's Believe LP, including Scott Amendola himself, Nels Cline, Jeff Parker, violinist Jenny Scheinman, and bassist John Shifflett. The group sounded great, especially for night two of a three-date tour. The night started off slowly with a percussion driven song call "Lullaby for Sasha" which provided a smooth segue into the violin-driven strains of "Believe". For the most part, Nels seemed to hold the reigns of the band, acting the part of animated director, while Amendola laid down the backing grooves. A spirited cover of Thelonius Monk's "Pannonica" kicked off the night's more upbeat numbers including a new tune entitled "Blues for a Grand Bizarre". The highlight of the evening was the one-two punch of the Crazy Horse-esque "Buffalo Bird Woman" and the afrobeat pioneer Tony Allen tribute "Oladipo". Nels Cline's guitar-work positively exuded brilliance during these songs, nearly stealing the show from an extremely talented band. The night was capped off with "Cesar Chavez", a song that showcases Amendola's unique rhythmic skills. The whole night was a real treat, it's not too often that this segment of the progressive jazz scene makes it way out to C-bus. The group sounded great, especially seeing as this album was recorded almost two years ago. After a short e-mail correspondence with Amendola, I can confirm that another record with this line-up of musicians is in the works, with recording taking place sometime this year. You heard it here first! Also, after the tremendous response to this show, it doesn't seem unlikely that the Nels Cline Singers may make a stop in Columbus in support of their two new records being released in May.

On a side note, this the first post I'm writing on my brand new Mac mini. I must say, so far I'm really enjoying it. It sure beats upgrading to Vista (which, from what I hear is just a big old OSX ripoff anyways). Since I now have access to the excellent GarageBand application, I'm seriously considering testing the podcasting waters. Expect my first effort within the next few weeks or so.
Posted by Zach L. at 11:03 PM

This is great info to know.