Meet Me in the City

This year's CMJ put me about three nights behind on sleep and equally as many days behind on things I needed to get done, which is why this post is a bit late. Don't interpret that as a complaint—quite the contrary—buying that last-minute plane ticket was one of the better choices I've made in recent memory. The festival may not be the king-making hub of the independent music scene that it once was, but it's still an amazing opportunity to see a bevy of bands-on-the-rise over a very short period of time. It's also a textbook case in networking opportunities—hence my stash of homemade business cards. Perhaps most importantly, it's a chance to meet up with old friends as well as make some new ones. Oh yeah, and there's plenty of free beer and swag. 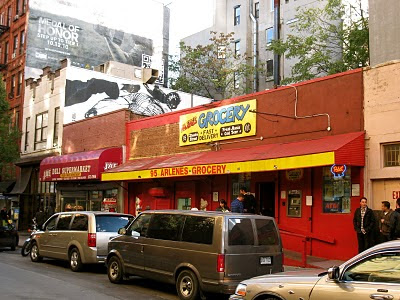 I flew in to New York Thursday morning, and given my badge-less status, I decided to head over to AAM's free showcase at Arlene's Grocery on the Lower East Side. I grabbed some of the greasy pizza that was provided and caught a set from a group called Kitten that straddled the line somewhere between being a mediocre Yeah Yeah Yeahs cover band and a bunch of Metric impersonators. Wandering the streets seemed like the better choice, so I did just that, finding my way to the absolutely amazing Toy Tokyo. Before long, it was time to head over to the Medium Rotation mixer, which packed a boatload of college radio kids and promoters into a tiny bar in the East Village. While there, I finally got the chance to meet Graham of A Man A Plan A Canal in the flesh—the guy who helped me bring the Wilco tour documentary to town a few years back and has been an invaluable resource ever since. After a couple of beers, it was off to Brooklyn with Matt and the Terrorbird crew for the CMJ pub crawl—an event that I survived thanks to my choice to abstain from an absinthe cocktail. Making my way back to Manhattan, I ended the night at the Matador/Beggars Group party pounding beers alongside the affable Steve from Team Clermont. 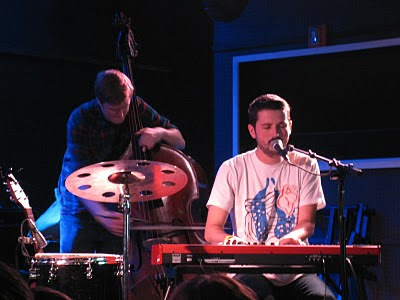 After the alcohol-soaked day that was Thursday, Friday was a day for music and hangover cures. I started out at the Knitting Factory for Distiller's day party and—on the suggestion of my West Coast friend Cora—went across the street for an excellent panini. Back at the Knitting Factory, I first caught a set from Boston's the Hush Now who made a timely debut of their Halloween single "Please Mephistopheles." Next up was a set from S. Carey, whose Midwestern chamber pop has been earning them some well-deserved accolades as of late. The group alternated between delicate string-driven arrangements and raucous bouts of noise, all presided over by beautiful vocals from the Bon Iver drummer—who also named his band after himself. A quick jaunt back to the Lower East Side landed me at the Pirate! day party in time for a set from the Mynabirds. Ever since hearing their debut record What We Lose in the Fire We Gain in the Flood, lead singer Laura Burhenn has joined Neko Case on my list of favorite female vocalists. She was equally amazing live, turning in literally pitch-perfect renditions of cuts off the aforementioned record—all skillfully requested by the lovely Christine from Pirate. 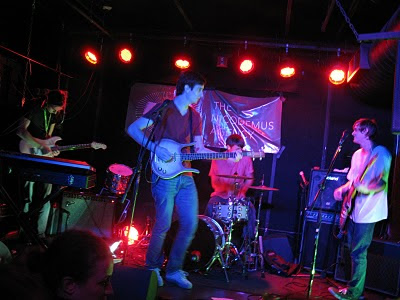 It was back to Brooklyn—Park Slope to be exact—for the remainder of the evening, where I camped out at a fairly new venue called the Rock Shop for the Nicodemus Agency showcase. The main reason for my attendance was based around the fact that the Pomegranates were playing later in the evening, but I was clairvoyant enough to show up early and catch some of the supporting acts. I walked in just as a group called Santah took the stage and launched into a set of striking folk-rock, bolstered by the impeccable vocal harmonies of siblings Stanton and Vivian McConnell. Later in the evening, I would learn that the band's beautiful self-released debut, White Noise Bed, was recorded at Pieholden Suite Studios, just weeks after the death of owner—and former Wilco-member—Jay Bennett. Not only that, but the aforementioned brother-sister duo hail from Belleville, IL—birthplace of none other than Jeff Tweedy. Next up was a set from Parlour, a prog-rock collective that called to mind the latter day stylings of Tortoise. Hot on the heels of releasing one of my favorite records of the year, Pomegranates delivered a set that perfectly showcased their psychedelia pop sensibilities. From the mesmerizing stomp of "One of Us," to the delicate falsettos of "50's," the Cincinnati quartet's performance solidified itself as one of my favorite moments of the weekend. Following such a spectacular set was an almost unfair position to be put in, but college radio stalwarts +/- admirably rose to the challenge, blazing through a collection of tunes that capped off the night in style. 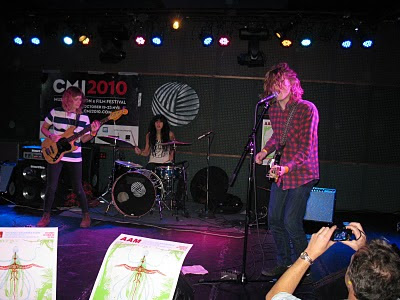 Saturday was another early morning, as I dutifully trudged back to Brooklyn for the AAM party at the Knitting Factory. I walked in just as Francis and the Lights took the stage—a group I'd been subjected to earlier this summer when they opened the MGMT Lolla aftershow. I can't say that I've found anything to like about the band, although I suppose they're perfect if you're into the type of schlock they play in dentists' waiting rooms. Thankfully, their set was short and my supply of drink tickets managed to distract me until the bubbly Magic Bullets took the stage. Even in my morning stupor, it was hard not to be moved to dancing by the permanently up-tempo pop rock sounds these San Francisco boys created. By the time Ty Segall struck his first chord, I was wide awake and ready to get lost in his unrelenting, noisy waves of garage rock nostalgia. I've been a fan of some of his more recent recorded work, but seeing Segall with his band is where he really shines. At some point during the set, I decided that these guys would have been a far better choice for bringing the music of Sex Bob-omb to life than Beck. As the crowds grew thicker, I decided it was high time to run down the street to Barcade for the Team Clermont day party. There weren't any bands playing, just a bunch of free beer and one of the nicest collections of '80s arcade cabinets I've ever laid eyes upon. I managed to get in a few games of Smash TV, Tapper, Donkey Kong and Rampage before heading back to Manhattan. 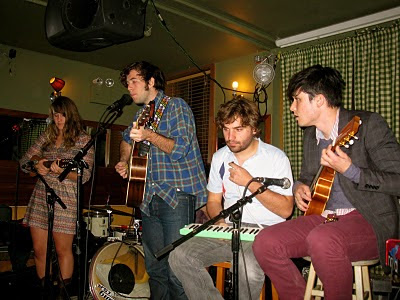 The majority of my last evening of CMJ was spent at Pianos, where the Big Ugly Yellow Couch acoustic showcase was taking place. First up was Santah, whose subdued finger-picked renditions gave plenty of room for those beautiful vocal harmonies to shine. Their performance solidified them as my favorite new discovery of CMJ—a truly talented group of young musicians with an enthusiasm befitting of the soaring melodies they create. I expect they'll be on bigger stages in front of much larger crowds by this time next year. Brooklyn's own Dinosaur Feathers were up next, slightly bending the rules of an acoustic performance through their use of a drum-machine. As a fan of their record Fantasy Memorial it was a real treat to get to witness some of that quirky pop-rock goodness in person. Last on the docket was Young the Giant, who overcame a bout of technical difficulties and turned in a short set culled from their recently released self-titled debut. Bolstered by fretwork that echoed Britpop and vocals firmly planted in the West Coast, their earnest refrains brought a fitting close to my time at CMJ.

After the requisite final meet-up with all my CMJ cohorts at Lakeside Lounge, I got my last two hours of sleep for the weekend before boarding a plane back to Ohio. Weeks later, I'm still convinced it was worth it.