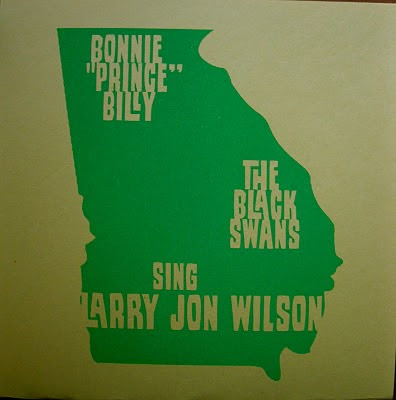 The dead wax on the A-side of this 7-inch is inscribed with the words "flaunting obscurity"—an appropriate statement considering the reputation of its subject. Larry Jon Wilson was a country musician who released four well-received records during the latter half of the 1970's, before leaving the music industry as abruptly as he appeared. Years later, the Black Swans' Jerry DeCicca convinced Wilson to record again, resulting in 2009's eponymous Drag City release. After suffering a stroke, Wilson passed away this past June at the age of 69. On Sing Larry Jon Wilson, Will Oldham and the Black Swans pay tribute to the little-known legend with two covers that explore distinctively different pieces of his legacy.

Oldham begins his contribution of "Bertrand My Son" with a spoken-word intro that frames the track while evoking Wilson's original recording. The titular son was Larry Jon's, a boy born with a debilitating condition that robbed him of his legs at an early age. It's the kind of background information that only makes Oldham's delicate take on the song all the more heart-wrenching. His voice accompanied by the airy strains of frequent collaborator Cheyenne Mize, "Prince" Billy makes his way through the track backed only by a wailing fiddle and finger-picked guitar. It's clear why this song was chosen, with its haunting imagery and comparisons of blessing, miracles and love to fruits on trees—deceptively simple symbolism that in lesser hands might ring of amateurism. Oldham shoulders the track with the same solemn grace of its progenitor and a reverence that bleeds through with every syllable.

On "The Man I Wish For You," the Black Swans task themselves with bringing to life an unreleased track that Jerry DeCicca found on one of Wilson's old demo reels. It's instantly identifiable as a Larry Jon song—an at times self-depreciating ode to a lover that betrays a yearning to be a more idealistic man. In the hands of DeCicca and his band, it's transformed into a loving tribute that casts Wilson as exactly the sort of man he insisted he wasn't. With an almost dirge-like quality, the Black Swans make their way through this forgotten gem, putting it to tape in a way that deftly avoids slavish imitation in favor of unabashed appreciation. DeCicca sounds entirely natural as the conduit for Wilson's unheard words, a right he's unquestionably earned as one of the people who coaxed the legend into recording one last time. As the Black Swans trail off, you may notice another message hidden in the dead wax on the B-side of this record—one that this release all but ensures—"Long Live LJW."