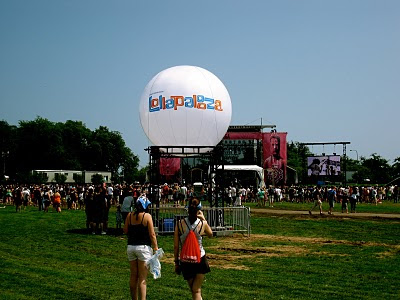 Sunday morning rain-showers have been a reoccurring event at the festivals I've gone to this summer, so it was appropriate that Lollapalooza followed suit. Sure, things were a bit muddy for the remainder of the day, but there was a paved surface on which to traverse the grounds this year, so it wasn't that big of a deal. I only heard a few complaints from people who had managed to ruin their brand new white shoes. 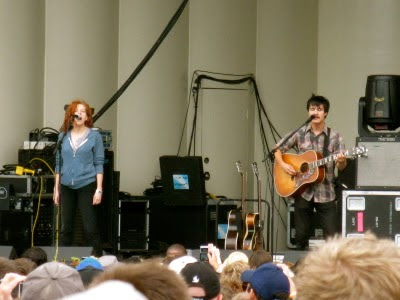 I made it over to the festival a little late, but I did manage to arrive in just enough time to see the Dodos over on the north side of the festival. Even though the sky was still pretty gray, they drew a respectable-sized crowd. I actually wasn't aware that they were a trio, their albums have always sounded much fuller to me, but I suppose that's just the studio magic at work. One of the guys in the band only played vibes, which is an instrument I love seeing and hearing on stage. A few songs in, the band brought out Neko Case to do guest vocals on a few tracks. As usual, she sounded really, really great. I had to run away to take care of some intern business, but I was glad I got to partake in a few songs. 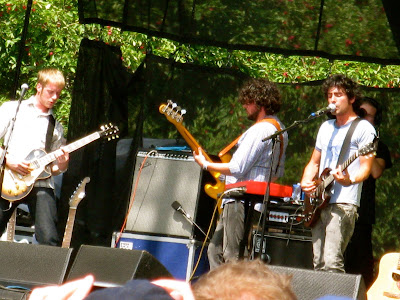 Blitzen Trapper are a band I saw for my first time last summer in Chicago, and were a total delight to see again. They're latest record, Destroyer of the Void, has really grown on me over the past few weeks, so it was a treat to see them play some of those songs, especially the sprawling title track as well as "Love and Hate". I think I might try to catch them again when they come through Columbus this fall for a show at the Wex, I feel like they're probably even better when removed from the festival setting.

For a good part of the afternoon, I caught bits and pieces of bands all around the festival. I saw a few songs from Mumford & Sons, who have this army of super-fans that I still don't quite understand. I also listened to a good majority of the X Japan set on the south side's main stage—their first American performance. It was as over the top and bombastic as one would expect, with a choral introduction leading into a set of throw-back glam rock delivered by a group of Japanese guys that looked like they'd stepped straight out of the 80s. Oh, and they also had cannons onstage. Additionally, I saw a bit of Frightened Rabbit delivering an epic set of their own over on a side-stage. The only tracks I recognized were "Swim Until You Can't See Land" and "Living in Colour," but the sizable crowd ate up the rest of their stadium-ready anthems. I'd be just fine with these guys stepping in to replace U2 in a couple of years. 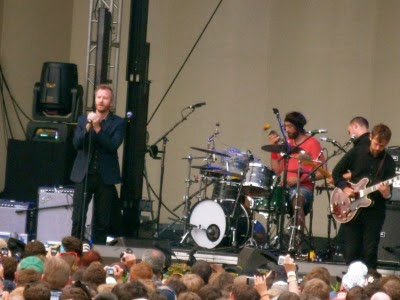 There were many things I loved about the National's show at Lolla. They opened with the subdued "Runaway" after the high-energy romp of MGMT's preceding set. They dedicated "Bloodbuzz Ohio" to all in attendance from the titular state. They generally proved—once again—that they're capable of commanding the attention of a festival crowd, even if they are a bit understated and moody much of the time. Like I said, they were great. But I was a little dissapointed with how predictable their festival set was. The National's headlining set at Pitchfork last year was without a doubt one of my favorite moments of that festival. For much of their Lolla set, I kept being reminded of that night, especially when Berninger jumped out into the crowd during "Mr. November." I guess he does that frequently, so maybe it's not that big a of a deal. I also realize it behooves them to play their 'hits' to a festival crowd. Maybe it's the fact that I've really gotten into their back catalog as of late, but I really missed some of those older songs. I'm probably contradicting myself by now—I think anyone who was there who hadn't seen them before got an extremely great show, and curmudgeons like myself at least got to hear some of the High Violet stuff for the first time.

As for Arcade Fire? Well, they put on an Arcade Fire show in Grant Park. I don't mean to sound totally indifferent, but I guess I kind of was. I've seen Arcade Fire in one of the most epic settings as well as on tour, and while I dig their new record, it's pretty standard stuff for this group, and the live renditions of the newer material weren't exactly anything to write home about (although they make perfect blog fodder). Was it cool to see the assembled crowd yell the melody line to "Wake Up?" Sure it was. Was it the highlight of the weekend for me? Not in the least. But if David Bowie had showed up, maybe I'd be singing a different tune (curse you Bowie!)