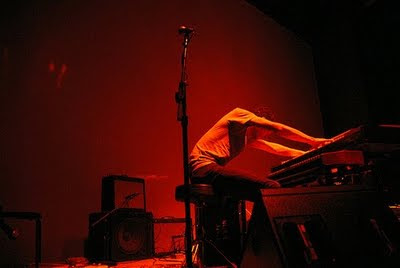 I arrived slightly late, but I caught the majority of Lymbyc Systym's set, and was impressed to say the least. I hadn't really heard of this group prior to learning that they would be opening for The Books, but upon hearing them I was immediately a fan of their Rhodes-heavy post-rock sound. In addition to the usual keyboard and drummer duo, the group added a violin player who really helped to flesh out some of their sparser arrangements. My favorite songs of their set were their slightly modified versions of "Astrology Days" and "Lotan Baba". The group also played a song or two off of their forthcoming record, which featured some very prominent looped string arrangements. I was a big fan of the full sound these three guys were able to produce, and I'll definitely be keeping my eye out for that new record of theirs'. 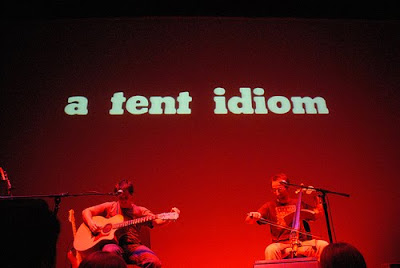 Nick Zammuto and Paul de Jong started off their set by giving the audience an update on what they had they had been up to since their last visit to the Wexner Center. After some time off, they've been hard at work on the next Books album which, judging by some of the new tunes the duo played, is based around the theme of New Age therapy. Many of the new songs played were centered around audio culled from cheesy old self-help video cassettes, and touched on themes such as hypnotherapy and meditation. Undoubtedly the best (and most humorous) of their new material was a song called "A Cold Freezing Night" which takes its revealing vocal elements from the contents of Talkboy cassette tapes. There was a marked increase in production values apparent in the films accompanying the newer songs, some of which were so good that I think the group should consider offering a DVD version of their new record. The duo also played a nice selection of older songs, turning in great renditions of fan favorites such as "Take Time", "Be Good to them Always" and "Smells Like Content". A welcome surprise was their performance of Nick Drake's "Cello Song", which they covered for last year's Dark Was The Night compilation. The crowd ate up every moment of their set, and most even stuck around when the duo decided to play "Smells Like Content" for a second time, in an attempt to correct some mistakes which has been made in the first go-round. Even though it clocked in at only a little over an hour, The Books' performance was immensely satisfying and whet my appetite for the group's next record which, from the sound of it, is shaping up to be a big step forward for the band.

Photos by Maureen Sill, used under the Creative Commons license.
Posted by Zach L. at 8:29 PM