Usually my Fourth of July festivities consist of sitting around in a field with some friends, eating and talking late into the evening until the fireworks start bursting overhead. This year, my celebration of America's birthday was a little bit different, but equally as gratifying. I've been living in Madison, Wisconsin this summer and when I heard that there was only an hour's drive separating me from from a free Stephen Malkmus show in Milwaukee, I jumped at the chance to change up my Fourth of July routine. 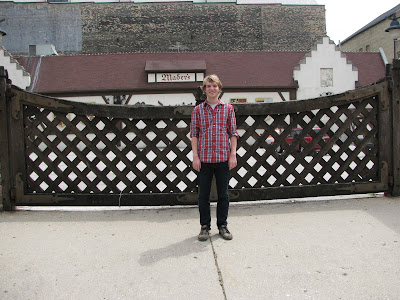 I was joined on this particular outing by my great friend and fellow Wilco-fanatic Marilu, who was kind enough to lend me the photos you're looking at. Since we were in the area, we made a point of stopping by Mader's, the famous German restarant in Milwaukee which most recently served as the background for Wilco (the album)'s cover. After taking a few pictures (sans camel and cake, sadly), we headed into suburban Milwaukee to find a tiny stage on a small, residential side-street, right outside of a neighborhood bar called Burnhearts. Not the kind of place I expected to see Stephen Malkmus play at, but the atmosphere of the entire event was so laid-back and fun that it ended up being the perfect venue. 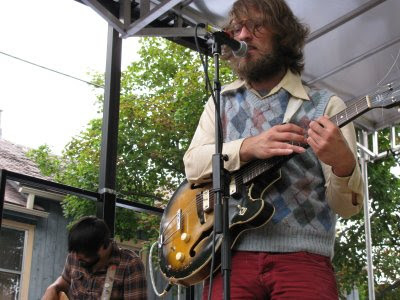 Since this was PBR Fest, we got to see quite a few bands before Malkmus and the Jicks took the stage. First up we caught the tail-end of Canadian folk-rockers Rock Plaza Central's set, although I'll be running into the group again later this month at Wicker Park Fest in Chicago. Next was the synth-driven pop-rock of Maritime, who seemed to be having a great time playing to a hometown crowd. The real suprise of the night for me was a group from Chicago called Maps and Atlases who provided a worthy opening performance for the Jicks. Their Don Caballero-esque arrangements and rapidfire finger-tapped riffs really won me over, and left me looking forward to possibly seeing them again this fall when they come through Columbus with Ra Ra Riot. 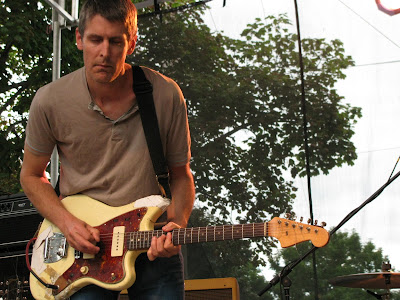 Let me preface this review of Stephen Malkmus' set by saying I've never been a huge fan of his solo work until I listened through Real Emotional Trash a few years back and it changed my mind about him and the Jicks. I have and always will be a pretty big Pavement fan, and to me Real Emotional Trash encapsulates everything Malkmus couldn't do with that group. I love how jammy and full of energy that album is, and that feeling really seemed as if it translated into the group's live performance as well. The band played almost everything I could have asked to hear off that aforementioned record, including "Dragonfly Pie", "Hopscotch Willie", "Cold Son" and "Elmo Delmo". Malkmus and the Jicks also took some time to reach into their back catalog, playing a few tunes I was familiar with such as "(Do Not Feed The) Oyster" and "Dark Wave". However, the real unique part of the evening took place after the setlist was finished and the remainder of the night became 'Malky's choice'. First up was a cover of the Rolling Stone's "Real Emotional Rescue", complete with some spot-on falsetto work care of Stephen. Next was a raucous rendition of the Kink's "All Day & All of the Night" which bled into the night's slowburning closing number; a cover of the Velvet Underground's "What Goes On". It's not every night that a great band like the Jicks decides to pull out a few impromptu covers, but it made the evening all the more special for everyone there. And I didn't miss out on fireworks entirely; we saw fireworks in the sky the entire drive back to Madison.
Posted by Zach L. at 6:32 PM