2009 finds my pull-list in a pretty great place, and this column will surely reflect this. Marvel's Dark Reign has thus far proved to be pretty entertaining, with titles like Invincible Iron Man and New Avengers really coming into their own. I'm looking forward to seeing what Dark Avengers has to offer later this month. From Dark Horse, I've got Hellboy AND BPRD coming in on a monthly basis, with some groundbreaking story lines to boot. Rounding my list out is Vertigo's Young Liars, which looks like it'll be a continuing series, and the last few issues of Greatest Hits, which has been a pretty good read thus far. Expect coverage on these titles and more in the weeks and months to come. Here's the week (and a few stray titles) in review: 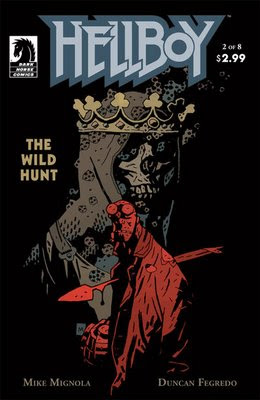 Hellboy: The Wild Hunt #2
This issue was a bit on the short-side; it's becoming apparent that in order to stretch this arch across 8-issues, some supplemental material is being included to back up the main story. It seems as if the information presented in these supplements will play some part in the main story somewhere down the road, but for the time being I found it pretty dry and uninteresting. The main story on the other hand, does not disappoint in the least. This issue gives us our first look at the giants that Hellboy was hunting. Perhaps the best part of it all is when Hellboy is sneaking through the crowd of giants, then abruptly decides to just come out and fight them. This results in a crowd-pleasing fight scene that stands shoulder to shoulder with classic Hellboy showdowns. I like how Mignola is keeping his cards close to the chest in this one, showing us glimpses of a parallel plot that will likely start to influence Hellboy's path. The climax of this edition certainly poses more questions than it answers, but it only builds the anticipation for next month's issue. 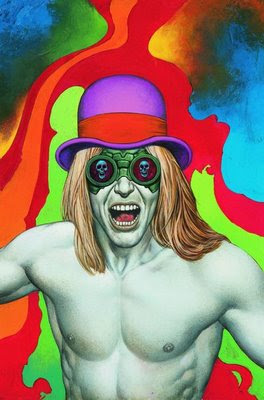 Greatest Hits #4
This issue was kind of a mixed bag in terms of ideas that worked and ideas that didn't. I liked the decision to open with the Mates battling the aliens in outer space. However, the story of the Mates was almost relegated to a sort of side story after this point. I kind of feel as if the Mates' story is being rushed through at this point in order to provide more narrative about the documentary film-makers who are trying to discover more about the Mates. While I've liked, for the most part, the way these stories have been balanced in previous issues, this one seemed to tip the scales firmly in one direction. It seems to me like there was alot more that could have been done with the story of the Mates. There were quite a few Beatles eras that weren't covered; in retrospect the jump to the psychedelic Sgt. Pepper era was much to abrupt. While I look forward to seeing how the series ends, and how the fates of each member of the team are reinterpreted, I don't find myself quite as excited about the concept as I initially was. Certainly pick this up if you've been following the series, but to those new to it I can't find a whole lot to reccomend here. 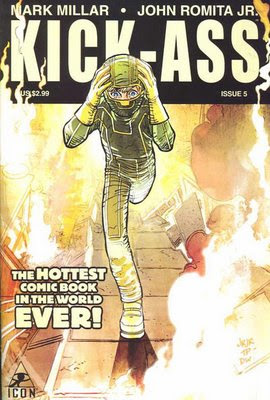 Kick-Ass #5
At first I thought the whole reason behind the continual delay of this issue (I think the last issue came out in August?) had something to do with the upcoming movie adaptation; some kind of ploy on Marvel's part to further increase the buzz surrounding this series. After reading this issue I now suspect that perhaps this issue was delayed only because it's an embarrassment. The only reason I started reading this title was because of all the buzz surrounding it, and I must admit that I enjoyed the first four issues. Sure, it wasn't anything revolutionary, but I really dig John Romita Jr.'s art, and Mark Millar's writing has been pretty solid thus far. Well, now let's prepare for the inevitable Kick-Ass backlash, because if this issue is any indication, the remainder of this series might just be downright awful. The biggest complaint here is Millar's writing; both the dialogue and the overall story. Anyone who sends a couple of regular kids with capes and masks running into a burning building in the name of heroics clearly doesn't grasp the term completely. On top of that, we're subject to monologue after angst-y monologue about how one kid just wants acceptance in the form of more MySpace friends. Tack on over the top profanity that doesn't sound remotely believable and you're left with a story that almost seems as if its TRYING to rid itself of any scrap of credibility. So much for a "real-life superhero story"; this one just comes off looking like it has no grasp on reality.
Posted by Zach L. at 2:39 PM