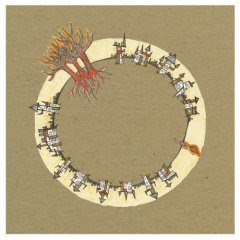 After an amazing record like 2006's The Lost Take, I had pretty lofty expectations for Dosh's newest release. Now, having listened though Wolves and Wishes several times, I can safely say that this is a very different album than I expected. In retrospect, The Lost Take is practically pop in comparison to most of his earlier work and some of the material off the latest record. Wolves and Wishes brings back some of the noise and more experimental arrangements found on earlier albums such as Pure Trash, however the implementation is much more mature and calculated. The almost 9 minute long track "First Impossible" is the best example of this, building textures and rhythms around a steady drone. It's a bold statement from an artist who rarely breaks the 4 minute mark in the studio. Later on the album "Food Cycles" exhibits a similar, albeit more succinct, sentiment, building a diverse rhythmic palette before destroying it in long-winded bout of wailing guitar feedback. This is not to say that Dosh shies away from the more accessible numbers that make him such an exciting talent. The album's centerpiece is a piece entitled "Wolves" which plays like a distillation of the musical vocabulary Dosh has built for himself, showcasing some great saxophone work care of collaborator Mike Lewis. It should be noted that Lewis is now a permanent part of the Dosh lineup, contributing to every song on the album. Lewis even co-wrote a few songs with Dosh, the aforementioned "Food Cycles" and one of the record's most interesting tracks; "Bury the Ghost". Bonnie 'Prince' Billy provides vocals of sorts for this track, which also showcases some great clarinet work from Lewis; not your typical Dosh piece. All in all, this record is markedly different experience from Dosh's previous release. It's certainly not as upbeat, and exudes quite a bit more atmosphere. I couldn't be happier with it though, it's a great listen, and the differences are what make it all the more enjoyable. I'm very excited to start hearing some live renditions of these pieces because, as Dosh fans will attest, this is where he truly shines. His recent appearance with Mike Lewis on Minnesota Public Radio bodes very well, especially the awesome rendition of "Wolves". Wolves and Wishes was released last Tuesday on Anticon Records and should be available in the Rock section of your local record store.