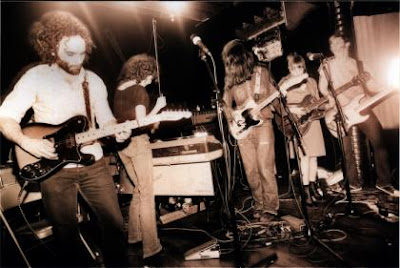 Wednesday night of midterm week at Ohio University; a pretty horrible night for a show in Athens by any standards. Those of us who did show up were treated to a solid triple bill performance that went late into the night. The Receiver, whom hail from Columbus, kicked off the night with an extremely great set in support of their debut record Decades. The duo, a drummer and bassist backed by pre-recorded keyboard, sounded like some kind of weird Radiohead meets Rush hybrid. Next up was local band Kaslo, who I got to see a few weeks earlier with Eric Metronome. They played what I can only assume were a few songs from their upcoming first album, before making way for the night's main attraction.

Oakley Hall took the stage at around 1:00 AM to a crowd of about 20 people, still reeling somewhat due to a long drive from Chicago (I know the feeling, my family drives from Columbus to Madison, WI at least twice a year). The set was filled with tracks from their recent Merge release I'll Follow You (see below for my review). This included high energy renditions of "No Dreams", "Rue the Blues", and "All the Way Down". While I enjoyed much of the new material, the older stuff is where the band really got their chance to shine. "Confidence Man" and "Lazy Susan" evoked Sonic Youth playing alt-country; noisy, spiraling folk stomps held together only by the krautrock precision of bassist Jesse Barnes. Two songs stood out for me; the first being "Marine Life" from I'll Follow You. On the album it's a kind of plodding opener, a warm up for the main attraction, but in the live setting the tune takes on an almost urgent tone, building slowly towards it's dual climaxes, something that definitely was not captured in the studio recording. Set closer "Nite Lights, Dark Days" was also an entirely different animal than its studio counterpart; dissolving into a lengthy jam of squealing feedback. Although attendance was low, I don't think there was anyone there who regretted staying up until 2:30 watching these guys play. Don't let the alt-country moniker scare you away, Oakley Hall knows how to rock.
Posted by Zach L. at 1:33 PM