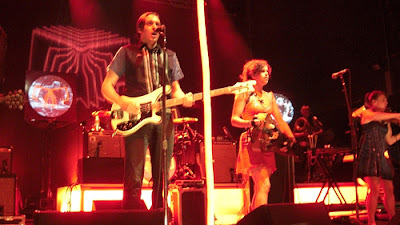 Last week was an excellent week; not only did I get the chance to see Oakley Hall but I also was finally able to bare witness to two much hyped acts who just happened to be touring together. I speak of course of LCD Soundsystem and the Arcade Fire, who played to a packed house Friday night at Promowest Pavilion. The night started out fairly early (around 7:30 or so) when James Murphy and company took to the stage for a one hour set of NYC dance punk. The group eased into their first song; a pretty long rendition of "Us v Them" which didn't quite sound quite as full as it should have live (could have just been a mixing snafu). "Daft Punk is Playing at My House" was sped up almost to the point of being unrecognizable, which made me begin to think we'd caught the band on a bad night. However, from that point out, something clicked especially when Win Butler and some of his Arcade Fire compatriots joined LCD to shout out the chorus of "North American Scum". The live renditions of Sound of Silver tracks "Someone Great" and "All My Friends" succeeded where the others had failed, particularity the latter which translated amazingly well into the live setting, becoming the anthem of the set. The highlight of it all was "Yeah (Crass Version)" which had pretty much everyone in attendance dancing, no small feat. The schmaltzy "New York I Love You" closed out the set, with Murphy adopting a few Sinatra-esque poses before walking from the stage to a roar of applause. 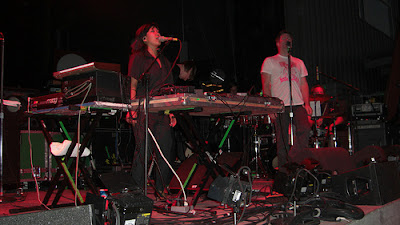 The opening strains of "Black Mirror" brought all 12 members of the Arcade Fire to the stage while old movie clips were projected on four small circular screens and the bass drum head. Flanked by a facade of organ pipes, a glowing projection of the Neon Bible and pulsating neon pillars, Win Butler and his band filled out the stage nicely. Live renditions of the album's key tracks, such as "No Cars Go", "Keep the Car Running", and "(Antichrist Television Blues)", were just as great as expected. "Intervention" and "Ocean of Noise" stood out in particular, the former for its booming pipe organ (kudos to whoever mixed that one) and the latter for the excellent live instrumentation, horns and all. Although the stage trappings would lead you to think otherwise, the night wasn't focused solely on the band's newest release. The band mined tracks from their debut record, EP, and even a single to fill out the rest of the set. Funeral was, thankfully, very well represented, including "Neighborhood #1-3" and "Haiti". Before launching into "Rebellion (Lies)", the final song of the main set, Win told the crowd to enjoy themselves as the Arcade Fire would not be back for sometime. However, this didn't keep the group from returning to the stage once more for an encore, concluding the night with the rousing "Wake Up". It's one of the first times I've ever felt truly compelled to sing along, the whole crowd helped out with the chorus and it sounded loud enough to reach the streets of nearby Columbus. The Arcade Fire was truly an experience, and likely one of those concerts I'll be able to remember pretty vividly for years to come. So nice of them to stop through Ohio before getting to work on the next record...

Photos care of brokenaccidentalstar
Posted by Zach L. at 7:06 PM