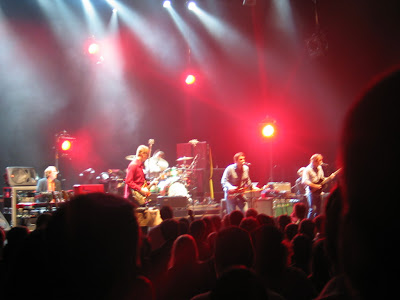 Well, it's been a while since I've posted here. Suffice to say, I'm not dead, just unmotivated and busy with more pressing matters. In the months since my last post I've graduated from high school, landed a summer job and to top it all off, last night I attended Wilco's show at Cincinatti's Aronoff Center. A great night to say the least, especially with an opening band as outstanding as Low. Before the show I ran into Mike Jorgenson on the sidewalk outside the venue and started out the signing of my "What Light" 7" single (a single which none of the band even knew existed, m 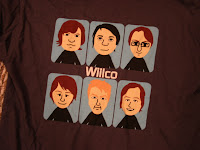 ore on that later). Doors opened early and before taking my seat I snagged an amazingly clever Nintendo Wii-themed Wilco t-shirt pictured to the left. Low kicked the night off promptly at 7:30, drawing mainly from their newest release Drums & Guns (a real grower, I've been listening to it quite a bit as of late). The band didn't rely on pre-recorded effects of any sort, opting instead to rearrange songs to be played by their three-person configuration. Alan Sparhawk and Mimi Parker's haunting vocal harmonies were in full effect, making the accompanying music almost secondary in comparison. The sparse audience in attendance for this opening act were surprisingly respectful, which is really integral at a Low show since so many of the songs are quiet and subdued. In the words of Nels Cline "Low is the only slowcore band who gets it right".

Wilco took the stage to the opening strains of "Shake it Off", quickly launching into "You Are My Face". Both were songs I'd never heard live before and, in my opinion, both greatly improved upon their studio incarnations. The focus on Sky Blue Sky tracks continued throughout the main set, with spot on renditions of "Side With the Seeds", "Impossible Germany", "Sky Blue Sky" and "Walken". The set was surprisingly YHF-heavy, including the usual "I Am Trying to Break Your Heart", "War on War", and "I'm the Man Who Loves You" joined by "Pot Kettle Black" a song from the era which I've never had the pleasure of hearing live before. A welcome change was the lack of Ghost is Born material in the set. While I don't mind hearing the songs, both shows I've been to previously were chock full of songs from that album, so it was nice to hear some new things. The band looked to be having a great time on stage, still full of all their beginning of tour energy. Tweedy introduced the audience to a Spinal Tap-esque stage piece which turned out to be a tiny macramé owl that came down from the rafters onto the stage behind the band ("Adjust yourself to THAT reality"). The main set culminated with "Hummingbird", but the band quickly returned for their first of two encores, launching into the great new tune "Hate it Here" following it up with the a rendition of "Poor Places" that bled into the krautrock of "Spiders". The night ended up with a sing-a-long to "What Light" and the pop-rock goodness of "Heavy Metal Drummer". 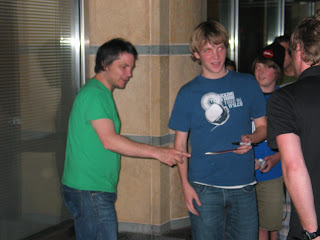 After the show I managed to get the rest of the band sign my "What Light" 7". No one in the band had any idea that Nonesuch had even put out a single in the UK. Tweedy wondered why they hadn't at least sent him free copy 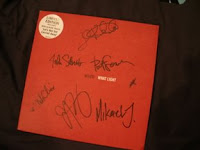 for his collection. Nels was excited about the inclusion of rocker "Let's Not Get Carried Away" as the b-side. I gave Glenn the URL of the website I imported from (Juno Records, for any of you who'd like to own a copy). My only regret is that I didn't get to meet any members of Low, but I can't complain too much. Yet another awesome night with Wilco.
Posted by Zach L. at 12:37 PM