Album Review: Mogwai "Hardcore Will Never Die, But You Will" 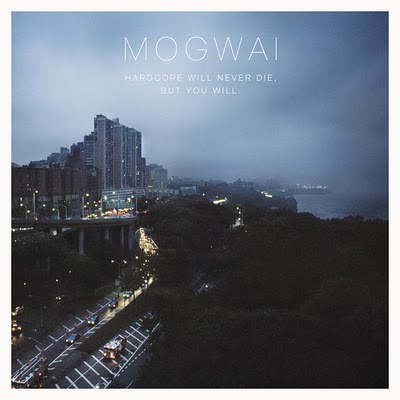 Grapple with your own mortality all you want—you're simply not hardcore enough to live forever. Coming off of the focused intensity of Mr. Beast which in turn bled into the heavy, over-indulgent slog of The Hawk is Howling, Mogwai's latest finds the Scottish post-rock outfit reaching for immortality and settling for clever epitaphs. Though the group is reunited with Paul Savage, producer of the group's seminal debut Young Team, it's unfair to expect another release of that magnitude. Bands of this persuasion so often start their careers with the ferocity of hurtling comets, only to slowly cool and settle into comfortable orbits. What makes Hardcore Will Never Die, But You Will so interesting is the erratic path it has decided upon.

The gently bouncing delay of "White Noise" opens the record, slowly forming a path towards the inevitable crescendo. Admittedly, it's no huge departure for the group, but with 16 years of experience under their belts, the execution is nothing if not masterful. The fuzzed-out guitars of lead single "Rano Pano" just miss overstaying their welcome, before promptly being absorbed into a spacey, shoegaze romp. "San Pedro" flirts with same concise, riff-based structure of "Glasgow Mega-Snake," featuring crisp guitar lines and some of the poppiest melodies ever to grace a Mogwai record. In lesser hands, the krautrock-tinged "George Square Thatcher Death Party" might ring of amateurism, but here it's a textbook example in the tasteful use of vocoders. "How To Be A Werewolf" is at first blush an almost quintessential Mogwai arrangement, rife with ambiance and propelled by an ever-building push towards a majestic and joyous conclusion.

In spite of its numerous successes, an album with as much scope as this is not without its missteps, and unfortunately most of Mogwai's find the band repeating past indiscretions. Closing track "You're Lionel Richie" is an overlong decent into the same sort of heavy, sludgy sound that plagued much of The Hawk is Howling. "Letters to the Metro" attempts to exist in the same piano-driven vein as "Auto Rock" but devolves into a repetitious ballad with no climax to speak of. Although its disappointing to see the group falling into familiar traps, some comfort can be taken in the fact that even Mogwai's more egregious tracks stand head and shoulders above those of the hordes of post-rock imitators that have sprung to life throughout the years.

On their latest release, Mogwai eschew the conceits of its previous two releases in favor of a more all-encompassing look at the gracefully aging band's palette. While not without its flaws, it's a record that simultaneously celebrates the group's multifaceted past while admirably breaking new ground. Thematically, Hardcore Will Never Die, But You Will feels like an acknowledgment of age slowly catching up, death growing ever closer, and the temporary but transcendental ability of music to preserve a moment in time, if only for a split second. Mogwai is not ready to die, and this record is proof positive that they still have something left to offer.
Posted by Zach L. at 9:30 AM

It is used in extensive range|a variety} of purposes including structural elements for plane, architectural and automotive trim, vehicle wheel overlaying, trailer our bodies, cooking utensils, drainage, sinks, and home equipment. This grade achieves high strength by rolling and will lose much less ductility than different related stainless-steel grades. To optimize corrosion resistance, this grade must Stylus Pen be cold worked in the annealed situation.