In Remembrance of Trish Keenan 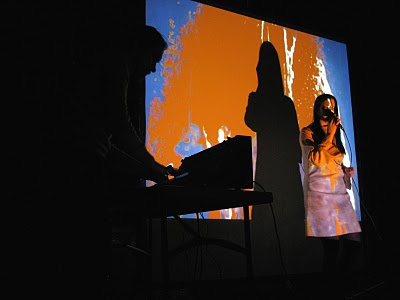 Today the world has lost the wonderful voice of Trish Keenan, lead singer of the English experimental electronic pop duo Broadcast. Warp Records has released a statement on the matter that I won't bother re-hashing here.

I recall first getting my hands on a Broadcast record during a time back in high school when I was totally taken with the music of Stereolab and went looking for similar thrills. I ended up with a copy of their Extended Play Two EP, an ethereal set of songs that I still find myself going back to from time to time.

In October of 2009, I was lucky enough to get to see Broadcast perform on their dual-headlining tour with Atlas Sound. I recall them opening with a winding and dense 20-minute track that found the duo behind their synthesizers exchanging volleys of noise, with the occasional yelp or howl from Keenan. When the group launched into their more recognizable songs, Keenan firmly planted herself directly in front of the projection screen, colors and shapes oscillating on her white dress and pale complexion. There was no need for theatrics or flailing about—just the presence of that unmistakably beautiful voice.

Thanks for the music, the best of which lent a dream-like glaze to the oftentimes bitter reality that we inhabit. Trish Keenan, you'll be sorely missed.
Posted by Zach L. at 9:16 AM

Email ThisBlogThis!Share to TwitterShare to FacebookShare to Pinterest
Labels: broadcast