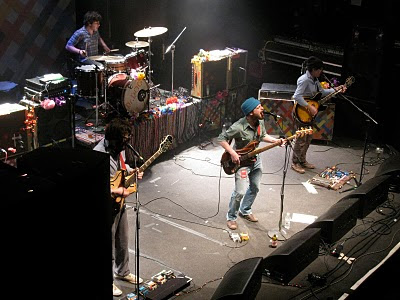 I've missed out on seeing Dr. Dog far too many time over the past few years, so Friday night's show at the Newport was an event that was a long time coming, to say the least. That being said, I walked in to this show not really expecting to be blown away. I'm a big fan of the group's past two records, We All Belong and Fate, but based on the unique production and sound of those two albums, I always pegged Dr. Dog as more of a studio band. Needless to say, I was proved wrong several times over by the time they left the stage. The band wasted no time in starting the night out on a high note, blazing through a riffed-out rendition of "Worst Trip". All the highlights from their recent back-catalog were represented from the Beatles-esque pop-jangle of "The Girl" to the more soulful strains of "The Ark". However, I think my favorite aspect of Dr. Dog's live show was hearing how the group re-worked the instrumentation of their songs. The live versions of some tracks took on a totally different style than their studio counterparts, relying mainly upon tight unison guitar work that called to mind the instrumental interplay of bands like Built to Spill. Also of note was the band's vocal prowess; all the harmonies were spot on, with no in-ear monitors in sight. 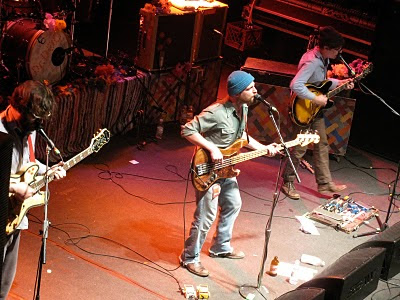 The group debuted a few tracks from their upcoming record Shame, Shame, although not the lead single "Shadow People" which showed up on Stereogum last week. The group has said that the new record is an attempt to capture the energy of their live shows on tape, so if the reaction to the material they played at the Newport is any indication, this certainly bodes well for the album. Shame, Shame hits April 6 via Anti- Records, and the group will be touring throughout spring in support. If you have any misconceptions about how great these guys are live, go check them out. They'll prove you wrong and, like me, you'll enjoy every minute of it.
Posted by Zach L. at 9:38 PM