Talk about a summer of firsts! I couldn't quite bring myself to spring for the full three day Lollapalooza experience, so I decided to attend the second day of the annual fest. Marilu (my wonderful photographer) and I lucked out and missed the downpour on Friday, and were instead scorched by a day of sun and heat. This was my first time at a BIG music festival, so I was a little taken aback by the sheer number of people crammed into Grant Park. However, braving the crowds was a small price to pay for some of the great performances we got to witness. 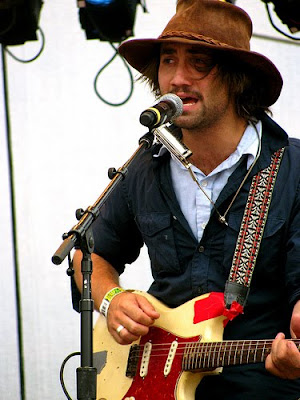 The day started out with a set from The Low Anthem, a group that I've really been getting into as of late. Unfortunately, one of the nearby stages did its best to drown out the band's comparatively subdued songs, but by a few songs in the mix was perfectly enjoyable. I wasn't familiar with alot of the songs that were played, but what really struck was the beauty of the sparse but effective instrumentation. The members of the group are all multi-instrumentalists, incorporating instruments such as clarinets, horns, and pump organs into their arrangement. The highlight of the set for me was the Oh My God, Charlie Darwin track "Home I'll Never Be" which was every bit as raw and raucous as its studio counterpart. These guys may have gotten stuck with a pretty crappy spot on the schedule, but they delivered a set worthy of bigger stage and a larger crowd. 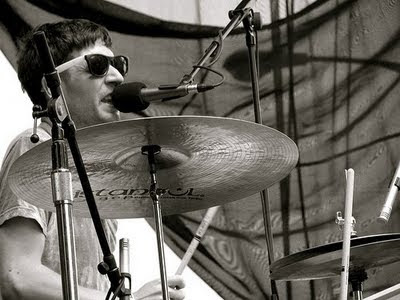 No Age's set was an entirely different animal than the one I experienced just a few days earlier at their show at the Memorial Union Terrace. The biggest difference was that No Age's guitarist had dislocated his shoulder the night prior, but managed to power through a nearly hour long set despite the fact that he has in a brace and hopped up on Vicodin. As a result, the most action the stage saw was a when a speedy fan hopped the barrier and jumped up on stage to deliver a note to No Age's drummer before quickly evading security and jumping back into the crowd. While I'm not really that familiar with No Age's recorded works, they sounded good and the oddly small crowd seemed to eat it up. 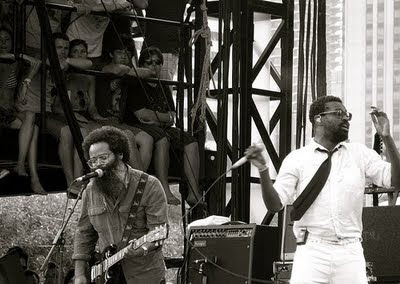 For me, the whole day kind of led up to TV on the Radio taking the stage. I was anxious to see how tracks from their superb Dear Science would hold up in a live setting. Turns out, they could have sounded better, if not for an extremely sub-par sound mix. I tolerated the muddy mix of opener "Love Dog", but by the time the band started "Golden Age" and things still didn't sound quite right, it didn't bode well for the rest of the performance. It's a shame too, because TVotR brought a killer horn section that really filled out their songs. It was just a little irritating when you couldn't hear Kyp Malone belting out the lyrics on "Crying" or that cool keyboard riff on "Red Dress". Not the band's fault, they looked as if they were giving it their all, and the set closer of "Staring at the Sun" sounded great. I just wish it hadn't taken the whole set to troubleshoot the mix... 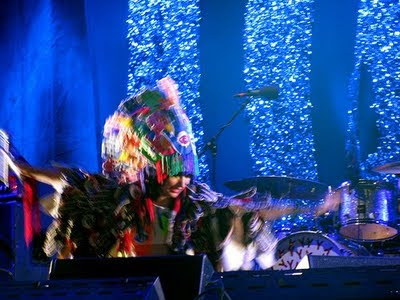 The Yeah Yeah Yeahs aren't the kind of band I would peg to headline a night of a festival, but after seeing the show they put on Saturday night, I can totally understand why they got the spot. The group proved themselves a totally competent replacement for the currently incapacitated Beastie Boys, thanks in no small part to the amazing vocal prowess and awesome stage presence of one Karen O. The band transitioned seamlessly between newer dance-tinged tunes such as "Heads Will Roll" and "Zero" and the older more rock-infused numbers such as "Pin" and "Date with the Night". Did I mention how good they sounded? I wouldn't be surprised if frequent producer David Sitek was behind the boards, making sure that the same fate that befell his band just an hour earlier didn't also affect the YYY's. An acoustic version of "Maps", during which Karen temporarily forgot the words, and a rousing rendition of "Y Control" made the night complete for me. The Yeah Yeah Yeah's encore-less set was a worthy end to a special day at a festival I'll certainly return to someday soon.
Posted by Zach L. at 9:53 PM