I'm going to blame a bevy of end of the quarter papers and projects for my relative silence concerning the world of comics as of late. It was great to be able to sit down this past Wednesday and get caught up on a few weeks worth of comics. Still missing a few things, most notably issue four of No Heroes and issue three of Dark Avengers, but I'll try to pick those up this week and share some thoughts on them. Here's the week (and then some) in review: 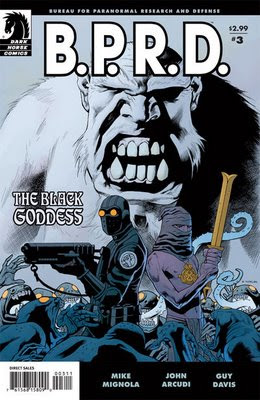 BPRD: The Black Goddess #3
I know I've said this before, but it bears repeating; I'm really digging the epic tone that BPRD is taking with their latest story arch. This issue doesn't do much to progress the plot, but it does fill us in on some of Gilfryd's backstory (i.e. how he came to be in the form/position he's in currently). It doesn't answer many questions I've had, but I'm sure this information will play into the series' ultimate payoff further down the road. This issue also gives us a heavy dose of action as Johann Kraus leads a military outfit against a swarm of frogs and those giant walking beasties that leveled part of a city in The Warning. It's a brilliant twist that finds the BPRD defending the very people they've come to destroy from a common threat. At least, that's what we're being led to believe at the moment; the final few pages suggest that there may be certain ties between the frogs and Gilfryd's plan for world domination. With two issues to go, things are really getting heated. Mignola fans; this is the perfect thing to tide you over until the last four issues of the current Hellboy story begin hitting stores. 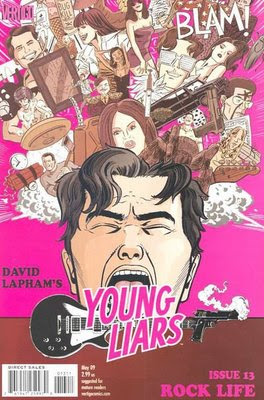 Young Liars #13
David Lapham, I don't know how you're going to explain all this, but my hat off to you for having the balls to put something as dense and confusing as this comic out into the world. This issue doesn't offer much in the way of answers (I actually can't remember an issue of Young Liars that has), but it does suggest that Danny is currently residing in some kind of twisted dreamworld in which all of his wildest dreams have come true. The best part of it all is that Danny knows it's all too good to be true, and is trying to come to terms with memories of his not-so-distant past. The last few pages of this issue suggest that the old Young Liars gang may be getting back together pretty soon, but only if Danny takes some rather drastic actions. I'm not sure if things are coming to a head, or just getting ready to blow up again, but who cares? This is one of the most consistently entertaining comics out there; it doesn't have to make sense. 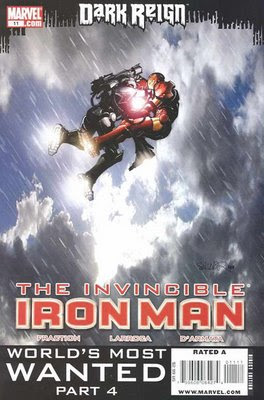 Invincible Iron Man #11
Is that Tony Stark!? You'll inevitably find yourself asking that same question at several points in this issue. With Stark going into hiding to avoid the wrath of Norman Osborn, Larroca takes the opportunity to give the character a pretty drastic makeover. We get to see Tony friends wrestling with his criminal status; some even think he should just turn himself in. The centerpiece of this issue is a battle between Stark in an outdated piece of Iron Man armor and his old friend Rhodey a.k.a. War Machine. It's unclear as to who War Machine is currently working for (maybe readers of the War Machine comic might know this information), but it seems clear that he still feels some sort of tie to his old boss and friend. The book ends with a splash, as Tony is shot out of the sky and into the ocean, where a battle with a familiar nautical enemy is surely in the cards. Fraction's writing continues to deliver some of the best Iron Man stories in quite some time. Marvel, keep this guy on the series, and I'll keep reading it. 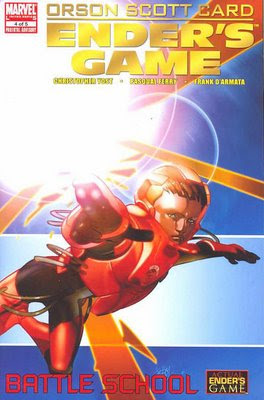 Ender's Game: Battle School #4
Yost is really finding a balance in this fourth issue of the Ender's Game: Battle School series. The story in this edition is fast paced and slightly hard to follow at times, but delivers all the needed plot points and information in a stylish manner. We're finally seeing Ender's genius in the Battle Room, and it's exactly how I imagined it would be. Still no sign of Bean, (maybe I'm remembering this wrong, but I could have sworn that the two crossed paths in Battle School at some point) however his story is being masterfully handled in the Ender's Shadow books. There something about seeing this story told in a visual medium that makes it all the more disturbing. These are seven-year-old kids who are being trained and treated as soldiers; pit against each other in combat. I think this could explain Ferry's choice to make the character designs play this aspect up; these are innocent-looking kids beating up on each other. It just makes the story hit home that much more; enough to make me want to take back my criticism of the art from previous reviews. Can't wait for the conclusion next month as well as the launch of the Command School series sometime after that.
Posted by Zach L. at 4:15 PM