These are late because I had the chance to go to a Kevin Smith Q&A this weekend in Columbus. It was a good time, and I actually made it to the mic and had a little one on one with the man himself. Sounds like he's doing some more stuff for DC in the very near future; hopefully it's a little better than "Cacophony" which even he admitted was a little lacking. Here's the week in review: Young Liars #12
Don't even ask me to explain what's going on in this book right now, because my guess is as good as yours. It's getting to the point where I look forward to this book every month just to see how wrong the assumptions I made based on events in the previous issue were. And that's fine by me; Lapham may have some grand plan, or he may just be throwing shit at a wall to see what sticks. Either way, this series contains some of the most entertaining, totally out of left field plot twists that have ever graced the written page. This month's issue informs us that the story told in the previous 11 issues was a total lie, a fabrication, a hoax. Danny Noonan has miraculously survived the events of the past issue unscathed (and with his 'manhood' resurrected) only to be informed that the supposed love of his life died at the age of 6, he's a rapist, and he's also a huge rock star who has sold a ton of records. Danny doesn't buy it though; and why should he? It all seems too convenient and contrived, and it's clear that someone is still pulling the strings. Could it be the spiders from Mars? The Brownbag Empire? There is no clear answer, and Lapham is more than content to leave the reader guessing for the time being. There's just not much of a difference between truth and lies in this series; which is exactly what makes it fun as hell. Jump on these issues now, because people are going to be talking about "Young Liars" for years to come... 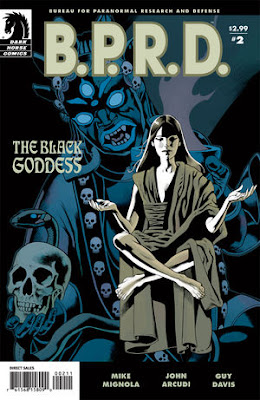 BPRD: The Black Goddess #2
This issue more than makes up for the snooze-fest that was last month's BPRD, and manages to bring my excitement back up to the level it was at during "The Warning". We actually see quite a bit of action and plot development in this issue, with the BPRD and a sizable military force going to Russia to find the location of Gilfryd's lair. We also get a reunion with Liz and some hints to her involvement with current events in the BPRD universe. And finally, we get the beginning of another gigantic frog attack, and the beginning of what looks to be one of the biggest BPRD battles yet. The first thing I want to comment on is Kevin Nowland's cover art, which is just beautiful; I certainly wouldn't mind seeing more of his work on the covers of future issues. Guy Davis' art inside the issue is also very nice this month; especially the dark and moody scenes inside Gilfryd's hideout. Mignola and Arcudi seem much more on the ball than they did in the last issue; the pacing is great and the contrast between the two simultaneouly transpiring events isn't overstated. I'm interested to see where things go from here, but it looks like we'll be getting to see quite a bit more of Liz from here on out. 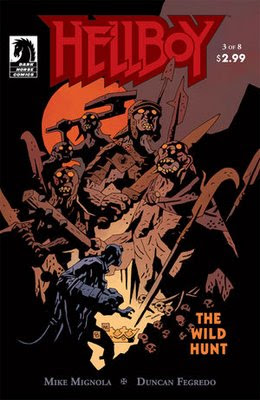 Hellboy: The Wild Hunt #3
I'm a little shaky on the intricacies of the Hellboy timeline at this point, but it's very clear that "Wild Hunt" is trying to tie up some loose ends and reunite us with some older characters. Come page four, there are even flashbacks to the previous issue where Hellboy got to fight some giants (which I didn't mind, that's a classic scene and one worthy of more of Duncan Fegredo's ink). This issue also contains a very heavy scene in which Hellboy's destiny is discussed at great length. The result of this is the revealation that Hellboy has one last chance to rid himself of the monkier of 'destroyer of mankind'. Next month's issue should answer some of the questions posed this month, then we'll be waiting for a few months until we see any new issues so Mignola and Fegredo can get caught up. So far I'm pretty pleased with the way things have been progressing. There's a war being set up, on the scale of the one being waged in BPRD at the moment. Could they be connected somehow? We'll just have to wait and see...
Posted by Zach L. at 6:13 PM