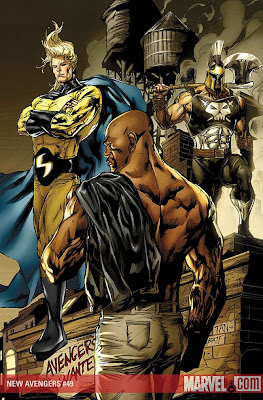 New Avengers #49
Color me impressed; Bendis ties up more loose ends in this one issue than in any comic he's written as of late. And here I thought the whole 'Luke Cage's stolen baby' story was going to drag through the majority of Dark Reign. Turns out, Bendis is content to bring that saga to a close and introduce the New Avengers to their replacements; the Dark Avengers. This is all a set up for next month's big 50th issue of the New Avengers in which the two disparate teams will allegedly meet up and duke it out. Billy Tan's art for this issue is a valiant effort, but looks a little bit rushed at times. There are a few characters he draws that consistently look odd, and one of them is Norman Osborn. The only thing that made him recognizable in some panels was that weird widow's peak of his. Hopefully he's got some help on next month's double-sized issue, or maybe he just got through this issue as quickly as possible to get to work on that one. Another extremely solid issue of New Avengers that moves the plot along and makes me that much more excited for next month's big showdown. 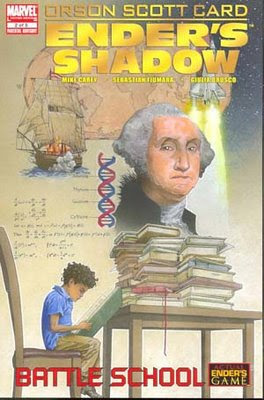 Ender's Shadow: Battle School #2
This wasn't quite what I expected out of the second issue of this series. Call me impatient, but most of the Ender's Game story I remember took place in space, a place that Bean doesn't even make it to by the end of this issue. That being said, I did really like how this month's edition showed us the origin of Bean and hinted at why he's such an important player in this story. The relationship between Bean and Sister Carlotta got played up quite a bit, but it made the separation of the two that much more gut-wrenching. Sebastian Fiumara's artwork seems a little more reigned-in this time around, but equally as good. I'm certainly looking forward to the first meeting between Bean and Ender, and seeing how the writers of Ender's Game and Ender's Shadow decide to intertwine their respective stories. So far, these adaptations have done a pretty admirable job of accurately capturing the spirit of Orson Scott Card's novels. I really recommend these series to anyone who's a fan of the books or just science fiction in general. 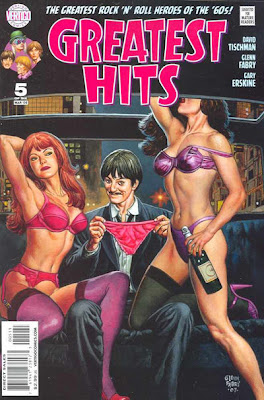 Greatest Hits #5
I had a few qualms about the way the story was being told in the last issue, but this month's edition brought me back into the fold. We finally get a look at what REALLY happened when the Mates went to space, and it's actually not entirely what I was expecting. There's some really great battle scenes towards the beginning of the book, but Glenn Fabry's art really shines in a black and white sequence involving Solicitor and Soul Sister that recalls John and Yoko's bed-in. The Paul McCartney superhero Crusader gets a great scene towards the middle of the issue that is a commentary on his post-Beatles band Wings. The only dip in the quality of the writing of this issue came at the very end when we're introduced to one of the documentarian's old flames via some really cheesey narration. I'm looking forward to seeing how this all wraps up; the series may have taken a few wrong turns, but it's been consistently enjoyable and a pretty humorous take on the lives of the Fab Four.
Posted by Zach L. at 7:49 PM