You know how everyone tells you "the stuff you love in high school and college will stick with you for the rest of your life"? It really must be true; how else do you explain the continued demand for Styx concerts? Well, I definitely found some things during my high school years that I can see myself enjoying for the rest of my life. Let's see, there's Wilco, The Office, Watchmen, Jim O'Rourke... the list goes on. Now, just over a year into my college career there are some new trends taking shape. I'm not saying I've given up on any of my high school favorites, far from it, but I've definitely tried some new things and found a few that have stuck with me. This is the first edition of my pretentiously titled 'Current Infatuations' series; an effort to share some of my new favorite things with all of you. 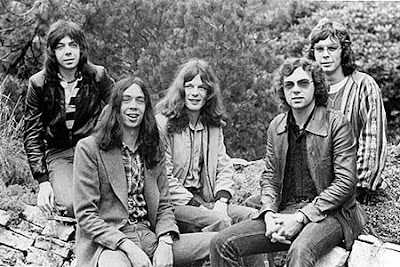 So, I guess I've always had a prog-rock fan hiding inside of me. It makes sense; one of my favorite albums to listen to as a kid was The Electric Moog Orchestra performing songs from the Star Wars score (I listened to it recently, and it just wasn't nearly as good as I remembered). In high school, I was into the free-form prog of the Fiery Furnaces as well as the classic rock radio staples like Yes and Rush. When my good friend Tom turned me on to Camel, everything clicked. This was that classic prog-rock band I'd never thought to look for. Camel was never that big of a success, hitting the scene in 1972 with a self-titled debut that was released to mediocre reviews and even more mediocre sales. However, I found this release to be extremely accesible as I was imdeiately drawn to the classic rock balladry of "Never Let Go" and the extended organ jam of "Arubaluba". It was a miracle that they stuck together and recorded a second album, Mirage, which found a following in the US with its intricate keyboard/synth based prog epics. By 1975, Camel had released their masterpiece, The Snow Goose, an entirely instrumental concept album in which the band is accompanied by an orchestra. The title track is one of the best solo guitar meldoies ever set to tape, a haunting theme that is reprised in many of the other tracks on the album. My interest in anything post-Snow Goose wains dramatically as it's very apparent that the group hit their creative peak with this release and never quite achieved anything on this level ever again, no thanks to numerous line-up changes. I'll leave you with this video of the group playing selections from The Snow Goose in their heyday: