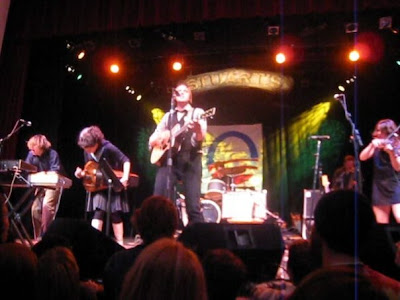 What can I say? Last night was an incredibly amazing and special night that I will not soon forget. Arcade Fire came to Nelsonville to garner support for a candidate who they believe in, and I think they more than accomplished that. Barack Obama is very lucky to have the support of a band like this, a band that will load a van and drive 14 hours to play two shows in a small middle-of-nowhere town in southeastern Ohio. Just an excellent night, where do I begin?

Arcade Fire's touring horn player Colin Stetson opened both shows with 15 minutes of improv solo saxophone. The guy is incredibly talented, he knows his instruments very well and can produce sounds that I don't think I've ever heard out of a saxophone. He's also a circular breather, which just blows my mind. His set was short, but the amount of energy put into it, and the fact that he did it twice in one night made it all the more impressive.

The six-person line up of Arcade Fire (including Win Butler, Régine Chassagne, Will Butler, Jeremy Gara, Sarah Neufeld and Colin Stetson) took the stage to an all-out roar of applause. The band promptly launched into "Intervention", a song that Win admitted was written during the 2004 elections, and was all the more depressing because of it. During this first show, the band was loose, still finding their voices after weeks without playing together. Next up was "Keep the Car Running", followed by a cover of David Bowie's "Heroes", a song that Win said he asked Bowie if he could play, to which he replied "Fuck yes!". The band's next cover was the Sam Cooke song "A Change is Gonna Come", admittedly a little weird coming out of the mouth of a well-off white guy, but in the context of the upcoming elections, a very poignant message nonetheless. The next three songs were the highlight reel for Funeral; "Rebellion (Lies)", "Neighborhood #3 (Power Out)" and the most heartfelt rendition of "Wake Up" I've ever born witness to. The band capped off their first set with John Lennon's "Gimme Some Truth", a song Pearl Jam commandeered to a similar effect during the 2000 elections. I won't go on at great length about the second set, suffice to say it was not nearly as well attended as the first, which is a shame because the band was much tighter. They played all the same covers as before, adding in "(Antichrist Television Blues)" in place of the two Neon Bible songs played in the first set. The smaller crowd ate it up, and the band ended on a high note with a significantly improved version of their Sam Cooke cover. I think Win and company accomplished their goal here, and I thank them for coming here to do it.
Posted by Zach L. at 10:13 PM